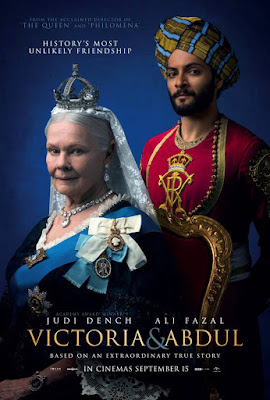 With a cheeky play on names, Victoria & Abdul hints that Queen Victoria so missed her late husband and consort Prince Albert that she looked for ways to replace him. The title of the 1997 film in which she befriended another servant of the royal household earlier on in her widowhood was similarly suggestive. Her Majesty, Mrs Brown.

Was Queen Victoria, widowed from her early forties and mother to nine adult children, still looking for some companionship in her sixties? Maybe, maybe not. Centuries earlier, Queen Elizabeth I spent a lifetime on the throne without a consort, and this is still a subject of endless fascination.

Victoria & Abdul is set during the last 15 years of the reign of Queen Victoria and is an encore in the role from Judi Dench, who was also 'Mrs Brown'. It begins more or less the moment she claps eyes on Abdul Karim (Ali Fazal) as he backs out of her dining hall.

Under strict instructions not to look at the Queen when presenting her with a commemorative coin from India, the reason for his being at court, curiosity gets the better of Abdul and he steals a glance during retreat.

The elderly queen has no interest in her meal or her companions, but she perks up a bit when the jelly arrives at the end of a long and tedious meal, and then looks back at the newcomer, registering his height, his grace and dark eyes.

It might have finished there, had Abdul not seized this window of opportunity to regale the bored and listless queen with stories about India, a place she would never visit because her advisors feared she risked assassination there.

He feeds her interest, extolling the sublime beauty of the Taj Mahal (not wrong there), and that delicious queen of fruit, the mango, and at her request instructs her in Urdu. However, he lets her believe that he is a Hindu when he is a Muslim, with a wife or two back home in Agra. 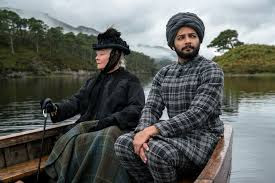 As the odd couple spend more and more time together, Victoria’s entourage is apoplectic with indignation at the Queen’s choice of companion. Filmed from unflattering low-angles, her puffed-up flunkeys – Sir Henry Ponsonby (Tim Pigott-Smith), her son and heir Bertie, Prince of Wales (Eddie Izzard), Lord Salisbury (Michael Gambon) and Lady Churchill (Olivia Williams) - just cannot make the Queen see she is provoking a minor scandal. Just as she did with John Brown, though there may have been grounds for scandal there.

Victoria just won’t allow Abdul’s dark skin and low rank get in the way of a good friendship. In the midst of a racist, classist milieu, she stands tall.

If only this film had explored the personality of this surprising monarch. And if only it had delved into the way the British behaved towards the colonials, rather than given everything the light comic opera treatment.

In this environment, the occasional acerbic comment from Abdul’s companion, Mohammed (Adele Akhtar), who is disconsolate in foggy, damp England and unable to turn his circumstances to advantage, is very welcome. So these people use extract from cow to make jelly? Barbarians! All very funny, but we don't hear enough from him.

Was Victoria a bit of a flirt? You get the distinct impression that she enjoyed unsettling her retinue, and enjoyed a bit of power play.

Under Stephen Frears’ direction, the diminutive Dench is in her imperious element as Victoria, the woman who once ruled around a quarter of the world. With pale blue eyes in locked-on stare and commanding if small in stature, Dench is the best reason to see Victoria & Abdul. Fazal is fine as Abdul, though it's an undemanding role.

Victoria & Abdul has its moments but the fascinating backstory is still to be told. The friendship between the first British Empress of India and her Muslim servant deserved more in-depth treatment than the light and breezy comic touch it gets here.