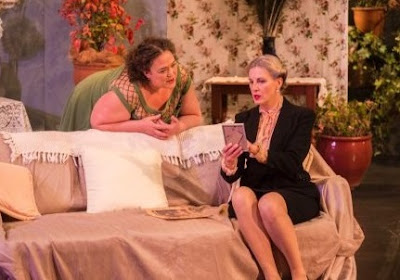 Toxic masculinity, emotional intelligence, even bromance - Summer of the Seventeenth Doll is a play unlocked by a modern awareness of gender politics, with Pigeonhole Theatre bringing a fresh feminist perspective to an Australian classic.

Jordan's Olive shows the character's flaws and dimensions: giddy and childish, but feisty when defending her unconventional alliance with Roo.  Every year he brings her a new kewpie doll in a garish tutu, and the entire living room is festooned with these ugly treasures.

Craig Alexander's Roo is described as an eagle, but after a bad harvest his wings have been clipped: stone broke and forced into the exhausting drudge of factory work, the wild benders of past summers have been swapped for quiet nights playing cards.  And if you're going to be boring together, why not just get married?

This well-observed play with vivid and recognisable Australian characters has been brought to life by equally well-observed performances, particularly from the female actors.  Director Karen Vickery has not only drawn out the female voices in the play, but given it a modern awareness that sheds new light on an already strong script.

When men fight in this production, the reaction of the women is the focus: there is concern, yes, but a hint of non-comprehension.  If these cane cutters just had a little emotional intelligence, wouldn't they realise that these brawls are a bit silly?  We are not watching from the perspective of men, caught up in a scrap over status - but from the perspective of women, who have always known that masculinity is a delicate and fragile thing.

In counterpart to the earthy relationship between Roo and Olive, we have a comic romance between cane cutter Barney (Dene Kermond) and wannabe posh Pearl (Andrea Close).  Close towers over Kermond, looking as though she could sling him over her shoulder and carry him off, but from the first moment their hands clasp - and Barney sneaks in a flirty stroke of his thumb - we know who the conqueror will be.

Close is a brilliant mimic and slips in an impressive catalogue of small details that tell character: when Pearl needs to tidy her coiffure, for example, she does it with a strategically placed lick of spit.  Kermond is also very comfortable in a role that gives him ample opportunity to snivel, flirt or roll around drunk as the scene requires.  The two actors watch and react to each other with such focus that they seem almost hypnotised, and I hope the pair find future opportunities to work together.

But there was a gap in tone between the two romances, with Olive and Roo firmly in the tradition of understated psychological realism, but Pearl and Barney evoking the vibe of a Doris Day movie.  Both pairings worked, but a more consistent tone could have bridged the comedy and drama.

Zoe Priest as young Bubba held her own with the more experienced performers, giving her role a lot of gawky character.  I also enjoyed Alex Hoskinson's straight-backed Johnnie: handsome, polite enough, but pretty much an asshole.  Liz Bradley meanwhile appeared to be having the time of her life as the Olive's canny mum Emma, and her scenes provided moments of complete joy.

The set by Michael Sparks made the interesting choice not to highlight the dolls, but to conceal them: in a cosy, busy lounge room with loud floral wallpaper, it was necessary to hunt for dolls hidden in odd spots around the stage.  This made the dolls feel insidious: not trophies, but weeds rampant among all the flowers.  The wide and broad set also sometimes drained energy from the play, and some blocking stranded characters too far from each other to make conversation seem natural.

The main thing missing from this production was a real sense of what life is like for men: a different production could have emphasised the backbreaking work of sugar cane farming, and what it is like to survive in a culture of violence.

But since virtually all theatre is men talking about men, Pigeonhole Theatre should be applauded for taking a step back from all of that nonsense, and giving the women in a classic Australian play a clearer voice than has ever been heard before.  Fresh, disarming, thoughtful, a production that adds to the conversation first sparked by its own script.
Posted by Canberra Critics Circle at 9:47 PM