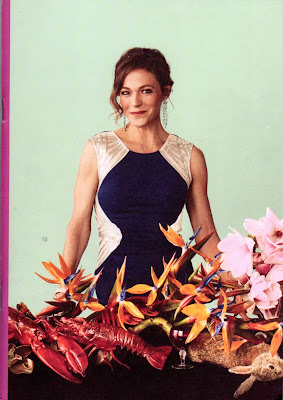 Middle-class English intellectual flummery for Dinner, I thought.  The audience appreciated the skilled acting, bringing back the performers for a third time, but there was not much of significance to talk about after 90 minutes’ highly contrived theatre.  There were jokes and comic play that mentioned ‘issues’, and some scenes that were so extremely farcical they naturally caused extended laughter.  But issues mentioned for comic effect are nothing without development of ideas.

The device of Paige’s game, where each person at Dinner had to speak for two minutes about a topic she had prepared secretly for each with the intention of tripping him or her up into fooling themselves, might have worked except that what developed, if not exactly predictable, seemed not unexpected after we had laughed, and the tone went up a level of farce rather than into seriousness.

Maybe the set design should make me think again.  While taking our seats, we found ourselves reflected in a rectangular section of the stage curtain.  When the curtain went up, the whole stage for dinner in an obviously upmarket house was behind a transparent drop.  The actors voices were heard over the sound system.  So this was obviously the ‘fourth wall’, meaning I presume that we now know that this play is not reality…as if we didn’t know this already.

The only use of this device followed (much later and at no particularly significant point as far as I could devine) the mention by Sian of her fascination with toilet door graffiti, which she quoted: FUCK SHIT UP.  She asked the self-admittedly failed artist (who had exhibited her detailed painting of her politician husband’s genitals and wondered why he was concerned about his electoral reputation) whether this graffiti was ‘Art’?

Paige interjects that it is ‘Literature’.  Laughs all round.  Ages later, the cast freeze (ie out of character?), move downstage with black felt pens in hand, and proceed to inscribe FUCK SHIT UP, in large block mirror writing so we can read it, on the inside of the transparent drop.  After while, a man with cleaning equipment (not a member of the cast) appears and cleans the ‘offending’ words off.

I leave you to consider the level of humour this is supposed to represent, or any intended depth of significance.  I thought it was the epitome of weak undergraduacy, while Britain over many decades has produced far better lunacy than this.

Another apparently significant device was for everyone to freeze occasionally, when someone had said something that others thought they shouldn’t.  Of course this could work in a serious drama as characters and the audience are forced to work out what they can say or do next; and it works a treat in the right place at the right time in a meaningful comedy: when Eliza says “Not bloody likely” in Pygmalion, for example.  But in Dinner everything simply stopped on the other side from us of the transparent wall, for quite a long time (it felt long, at least), and then action continued as if nothing had happened.  Maybe this was meant to be a comment on the nature of the wealthy who ignore anything they don’t want to hear.  But this idea is just my invention.  I could not support this as a theme from any evidence in the play.

In due course, Paige has the lugubrious silent waiter she found on the internet, threaten to cut her husband’s throat, and then actually stab her to death.  The only surprise is that the waiter at last speaks, refusing accept the tens of thousands of pounds Paige has paid him, taking just a waiter’s pay.

Maybe this is a joke about, or maybe is meant to seriously  represent the dignity of the working and (from Mike’s story)  the criminal class.  But the dead body remains slumped on the floor, nobody moves.  Then the pizzas (which Lars had ordered hours before to avoid eating Paige’s serving of living lobsters boiled in our presence) arrive… to laughter all round.  End of play.

So there you are: middle class morality for your delectation.  Of course there’s a huge amount more details than I can cover here, but they wouldn’t add anything to the ‘complexity’ of flavours in this Dinner.  You could call it a cold collation of funny theatrical devices, but no real warmth or flavour in the humour.  Not the fault of STC’s maitre d’, nor the designers of the menu, nor the cooks (and certainly not the waiter) – it’s just that the author hadn’t done the shopping very well.