SUMMER OF THE SEVENTEENTH DOLL 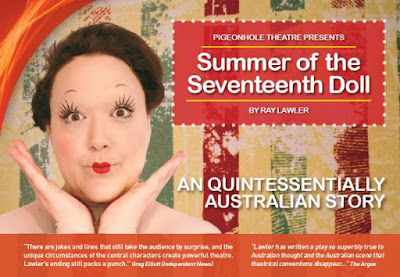 Ray Lawler’s 1955 play is a pivotal work in Australian theatre.  The naturalistic portrayal of recognizable Australian characters and their lives was embraced by the first audiences in Melbourne and the play has continued to charm and move playgoers ever since.

Set in 1953 in Melbourne in the home of barmaid, Olive, and her mother, Emma, two Queensland cane cutters have been spending each season layoff for the past 16 years having a fun and carefree holiday with Olive and her friend, Nancy.  Things have changed as the men arrive for the 17th time.  Nancy has married and gone and new friend, Pearl, has moved in.  Everyone tries to cling to the much-enjoyed past, but tensions soon arise.

Karen Vickery’s production shows a deep understanding of these characters and their hopes and dreams.  Her cast all look physically right and perform their roles with great feeling and realism.  It’s played at a good pace and we’re quickly drawn into the story of these fascinating characters.

Jordan Best gives a terrific performance as Olive, displaying a touching vulnerability under her bustling no-nonsense exterior.  Andrea Close deftly shows the two sides to Pearl – the woman worried about appearances and the fun-loving character underneath.  Liz Bradley as Emma is a sheer delight as this all-knowing and wise woman who has seen it all.  As Bubba, the girl from next door who has grown up and is now her own woman, Zoe Priest gives a strongly felt and believable performance.

Craig Alexander as cane cutter, Roo, who has begun to doubt himself and struggles to understand what is happening around him, plays all facets of this character with great conviction.  Dene Kermond is very appealing as his mate, Barney, a man who tragically doesn’t believe anything has to change.  Alex Hoskison gives a strong presence to the role of Johnnie.

Set design by Michael Sparks gives a nice flavour of a lower class Melbourne home of the 1950s and there are fine period props by Imogen Thomas.  Clever lighting design by Cynthia Jolley-Rogers, subtle sound effects by Matt Webster and period costumes by Fiona Leach add much to the atmosphere of the production.

This is an important Australian play which has stood the test of time.  Karen Vickery has given it an excellent production that is not to be missed.

Len Power’s reviews are also broadcast on Artsound FM 92.7’s new ‘On Stage’ program on Mondays from 3.30pm and on ‘Artcetera’ from 9.00am on Saturdays.
Posted by Canberra Critics Circle at 9:05 AM