The Wharf Revue: The Patriotic Rag 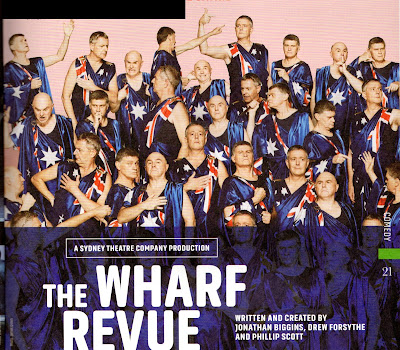 It was awful, just awful.  “...whether you want to calm your nerves or double your disillusion, we all need a fresh serve of laughter, dance and foolishness...” was the theme of this year’s promotion of The Wharf Revue which has been “keeping the nation’s political and cultural leaders on their metaphorical toes since before Sydney hosted the Olympics”;  but although there was plenty of laughter and dance, there wasn’t much foolishness.

Not on the part of the writers, I mean.  What was so awful is that they only had to accurately reproduce national leaders from around the world, present and past, to create a conga-line of terrifyingly black-humorous figures.

It was just awful to find ourselves laughing at not only our regulars like Tony Abbott eerily dancing in a weird fantasy as the destructor of everything, Malcolm Turnbull putting out his fantasy, singing Jimmy Barnes’ Working Class Man, Peter Dutton’s impossible-to-read face covered in sheer nylon stocking (and Anh Do’s spot-on portrait), or Blazey Best’s wonderfully gay edge in creating Pauline Hanson’s latest manipulative man in her political life, James Ashby – we can cope with these minor players in world politics.

But to laugh at characters – only minimally caricatured – like USA’s Donald Trump, North Korea’s Kim Jong-Un, UK’s Boris Johnson, and Russia’s Vladimir Putin became mentally disturbing by the final segment where the whole show was run by Trump, patting the bum of his daughter Ivanka just as his bum was being patted by Putin.  Only Angela Merkel stood out from the self-illusionary mess as a realistic, competent and ethical leader.  Maybe that too is a caricature, but the audience almost cheered rather than merely laugh as she put Trump in his place.

The success of this year’s revue comes about because the underlying motivation behind the humour is a serious criticism of the surge of nationalistic politics world-wide.  I heard comments like “There’s much more text this year” and “They really pinned down the characters”.  The show was also much more centred thematically in an interesting way.

Revue has always traditionally had a basic structure of skits interspersed with some kind of linking device, often used to give time for actors to change costumes between skits.  A revue with strength uses the links to grow the theme.  For The Patriotic Rag, videos are used of fictional ‘press conferences’ by absolute rulers in past history, back to Queen Elizabeth I, each absolutely dominating any questioners, speaking with overtones of the Donald Trump manner.  Like Louis XVI just before the French Revolution claiming the protestors against Marie Antoinette were publishing ‘cake news’.

This gave plenty of time for the magnificent costumes to be changed into, and provided a cleverly devised through-line leading up to the final scene with Donald Trump as Master of Ceremonies – hammed up as he does in real life.

So I can’t fault the writing, performing, costumes, make-up – especially the hair-do’s – and the technical work in making and showing the videos.

I did find last night, though, that the sound balance between the voices and the recorded sound (and even occasionally the piano audio) made it often difficult to catch all the words of all the songs.  Radio mics are traditionally difficult, but it was disappointing that Blazey Best came off worst, so it was probably both a frequency mix as well as pure volume problem, which may relate to the messy acoustics in the Playhouse (which has concerned me on previous occasions).  There are a number of performances to go here, so there is time to fix this.

Then, of course, the Wharf Revue: The Patriotic Rag will be even more awful, because every word will count.