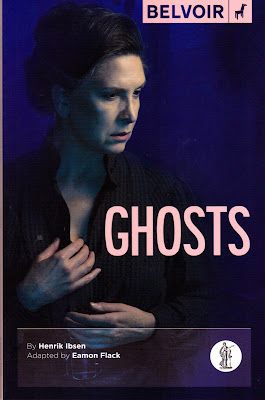 
Pamela Rabe’s intensity in stillness as the survivor of the worst kind of marriage; Robert Menzies’ frantic mess in trying to keep a fracturing world in order; Colin Moody’s solid honesty; Taylor Ferguson’s determination; and Tom Conroy’s extraordinary representation of mental conflict and breakdown: each equally take Ibsen’s play to its dramatic heights.  These actors are never ghosts, but memorable reality.

But there’s a story to tell about Ghosts.

I guess alzheimers has replaced syphillis since Ibsen’s day in 1881.  The difference is that when alzheimers syndrome becomes apparent, it is the result of genetic inheritance very much more than behavioural factors.  In other words, though it is a tragic shock if a son’s behaviour and physical condition become fraught like his father’s, no-one is to blame. In earlier times, before antibiotics and knowledge of genetics had advanced, the behaviour of the son in contracting syphillis could easily be thought of as an inherited condition.

In an irony of which Ibsen was obviously aware, he has Mrs Alving tell Pastor Manders the day before the pastor is to open the orphanage named as a memorial to her husband who “went back to the drink, or the whoring, or the self-pity”:-

“I wanted Osvald to inherit nothing from his father.  The money that once made Captain Alving such a catch is exactly the amount I’ve put towards the orphanage.  The exact price he paid for me.  Osvald will never touch that money.  Everything he gets will come from me.”

In fact, as we and Mrs Alving realise as the play draws to an end, with Osvald already drinking, smoking and unable to see the sun rising, he has ‘inherited’ all from his father and nothing from his mother: the drinking, the whoring, the syphillis and the self-pity.

How do we feel, as Mrs Alving tests her resolve to use the overdose of morphine pills that her son has collected?  And how relevant is this play in our days of legalisation or otherwise of voluntary euthanasia?

Should Osvald be left to an agonising death to punish him for sexual adventures as an art student in Paris?  Perhaps that is as it should be in deeply Protestant Christian foggy Norway in 1881.  Or should we praise Helene Alving for taking a modern humanist approach and relieve his suffering as I have had to do once for a loving dog suffering from terminal distemper?

The story for Regine is entwined with Osvald, to whom she is attracted sexually and also because of his higher class and wealth,  when she discovers that Jacob Engstrand is not her real father, but had rescued her mother from the contumely of the town by marrying her, knowing she was pregnant with Captain Alving’s child.  The half-brother and half-sister still kiss passionately, but Regine knows she must now go her own independent way.  She is the only one to escape the clutches of the ghosts which will not let Helene Alving go whichever decision she makes about Osvald’s morphine.

Belvoir’s production of Ghosts not only takes us back to the horrors of life and death in past times but shows us why women embody our best hopes for change.  Yet we cannot escape the decision Mrs Alving has to face, though we couch it in new terms and for different reasons.  Though he has taken a more political view than I have in his Notes, Eamon Flack has stated simply and  exactly the strength in his adaptation  and his direction, and of course in Ibsen’s writing: “We are never done with the past.  It never goes away.”