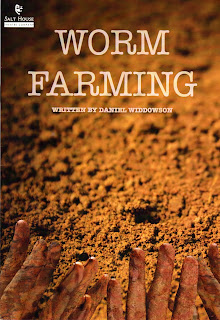 The title Worm Farming contains a mystery, a secret revealed through a series of farcical situations.  Murder most foul, Shakespeare might have said, as bodies pile up ready for composting.

Behind the farce is a message about ethical behaviour, specifically about conflicting attitudes towards refugees: of course we should help people in need, but we don’t really like them.  In fact, the Dawes family offer hypocritically to take them in only to use them as grist for their worm farm to add to the rotting bodies of their neighbours and their children’s friends.

It may sound gruesome, but the one-act play is quite funny when things seem more or less normal, turning even funnier the more gruesome it gets, as we realise what the parents Andrew and Ashley are actually up to.  It becomes something like the Addams Family when it gets to the point of putting the spare bodies in the freezer in the garage, where their son, Nick – up to this point unaware – keeps his icy poles and paddle pops.

Worm Farming is deliberately kept light, as theatre goes, but suits its setting in a museum.  The National Museum of Australia has been a member of the International Museum Theatre Alliance certainly since it hosted the 2001 Conference with Catherine Hughes, then IMTA Executive Director and Founder, from Boston Museum of Science, as the keynote speaker.  At that time the now defunct theatre-in-education team, the Jigsaw Company then headed up by Greg Lissaman, Canberra Youth Theatre and secondary college Drama teachers Lorena Param and Peter Wilkins were all involved with the NMA, working with Daina Harvey’s Education Team with the encouragement of then NMA Director Dawn Casey.

My Critics’ Circle colleague, Peter Wilkins, is still active managing the annual Festival of Museum Theatre: Come Alive in which a large number of Canberra and district schools have presented free theatrical performances bringing to life the collections at the NMA, the National Gallery of Australia, the National Portrait Gallery and Canberra Museum and Gallery.

Salt House Theatre Company, formed only last year, is a not-for-profit faith-based group from the Central Coast of New South Wales with a concern for bringing together experienced performers and directors with young people keen to develop their theatre work, under the artistic direction of television scriptwriter Daniel Widdower and his wife Leia as business manager.  In this production, for example, performer Nicky Kaalim is in Year 9, director Diane Ormsby has toured as a performer in The B-Bops children’s shows and is a drama teacher at Wyong Christian Community School, while others range in between, having completed or are currently undertaking various theatre and drama tertiary education and training courses.

The Company’s purpose is essentially the stimulation of thinking about ethical and social issues through their theatre presentations, and are keen to see the arts in action in museums, and to play for school groups.

Worm Farming proves not to be polemical: without pushing any line of argument, it raises, via its entertaining farce, issues about the behaviour and relationships of teenagers on smartphones, attitudes towards refugees and the responsibilities of parents, neighbours and friends, all of which could be the subject of post-show discussion, perhaps especially suited for young audiences.

Worm Farming may not be ‘grand theatre’ in the overall scheme of things, but I’m happy to call it ‘useful theatre’ at the human community scale.


Posted by Canberra Critics Circle at 9:57 AM