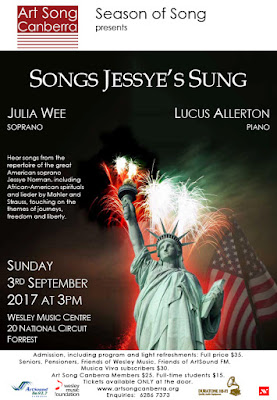 The Jessye Norman concert I saw at the Adelaide Festival Theatre back in the 1970s was memorable, not so much for the singer’s voice, which was stunning, but for her disappointing remoteness with the audience.  She came, she sang, she went.

Luckily for us, Julia Wee, in her Art Song Canberra concert, ‘Songs Jessye’s Sung’, established an immediate, genuine rapport with her audience.  Her voice does remind you of Jessye Norman and it was a great idea to use that quality with a concert of songs associated with that singer.

Commencing with a stirring ‘La Marsellaise’, Julia Wee entered in costume through the audience and set the mood immediately with a description of her first time seeing Jessye Norman in Paris on television singing that song.

She followed this with a group of African American Spirituals of which ‘Sometimes I Feel Like A Motherless Child’ was a standout.  She invested the song with a strength and emotion that was very moving.

The highlights of the concert were her performances of Mahler’s ‘Songs Of A Wayfarer’ and ‘Four Last Songs’ by Richard Strauss.

Her singing of the Wayfarer song, ‘I Walked Across The Fields This Morning’, was exceptional - clearly sung and obviously heart-felt.

She gave a well-thought out dramatic performance of the third of the ‘Four Last Songs’ - ‘I Have A Red-Hot Knife’ - and the piano accompaniment for this work by Lucus Allerton was especially fine.  She was impressive in her singing of the quiet emotion of the final song, ‘The Two Blue Eyes Of My Darling’.

Her encore, Cole Porter’s ‘With A Song In My Heart’, was offered, she said, to lift our mood after the sadness of the Strauss songs.  With arms outstretched as she sang, she embraced her audience once more with a warmth that we willingly shared with her.

This review was first published in the Canberra City News digital edition of 4 September.

Len Power’s reviews are also broadcast on Artsound FM 92.7’s new ‘On Stage’ program on Mondays from 3.30pm and on ‘Artcetera’ from 9.00am on Saturdays.
Posted by Canberra Critics Circle at 11:36 AM