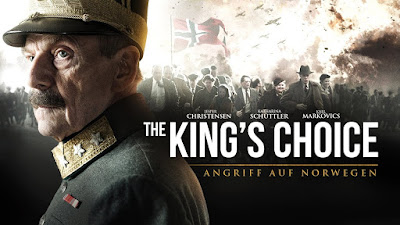 Not too many monarchs appear on screen in foetal pose, the way the King of Norway does in early scenes in this wartime drama. Another oddball monarch with issues, looking for escape from the world? It is a bit disconcerting until you hear mention of his back problems.

He has trudged through the snow playing hide and seek with his grandchildren, and now lies on his side on the floor in his study, clutching his shins. Behold, an ordinary man!

Haakon VII (Jesper Christensen), was Norway’s king during World War II and for most of the first half of last century. It’s intriguing to read that when Norway dissolved its union with Sweden in 1905 and opted to become a constitutional monarchy, the crown went to a prince of Denmark who became the country’s first king.

Long before April 1940 when the German war machine rolled, sailed and flew in demanding he and his government collaborate or be swept aside, Haakon VII was firmly established in the affections his people.

This intimate and engaging film directed by Erik Poppe is eager to affirm Haakon’s reputation as a man of the people. And to show how little say he had in negotiating with the invading German forces or in maintaining the neutrality Norway wished to preserve. It certainly succeeds.

Joining a sudden plethora of World War II films opening this year—Churchill, Dunkirk and the soon-to-be-seen Darkest Hour—it is another war film, yes, and another take on menacing, fast-moving, and dislocating events during the early weeks of hostilities. The narrative covers just three days.

From the start, the drama that engulfs Haakon and his family, including Crown Prince Olav (Anders Baasmo Christiansen), his government and the people, is about how to respond to the German forces that enter Norway demanding collaboration.

Should he agree to the urgings of the German ambassador Bauer (Karl Markovics) and cooperate? Or stand his ground and refuse to surrender sovereignty? To complicate things, a Norwegian politician by the name of Quisling has stepped into the breach of indecision and is offering to collaborate.

During these events, the handheld camera closely shadows Haakon and key personalities like Olav, in disagreement with his father, and Bauer, odious yet oddly pathetic. Close ups and a weaving handheld camera are neither superfluous nor exaggerated but integral to the drama, enhancing its impact to great effect.

A couple of military encounters, both of which heighten tensions significantly, are telling. When the Norwegians, scarcely prepared for war, take aim at the invaders entering Oslofjord, and when the Norwegian resistance assembles hastily at a crossroads.

As Haakon drives through the checkpoint, trying to keep himself ahead of the invading forces until he has decided what to do, the camera focuses on one of the men assembled. Young Fredrik Seeberg (Arthur Hakalahti), is overwhelmed to find himself face-to-face with the king. It seems to speak for the nation.

Seeberg is then seriously wounded in the ensuing skirmish, his fate dangling in the balance until final moments. In its subtle and engrossing way, this film has us on tenterhooks till the end.