Landscape with Monsters - Circa 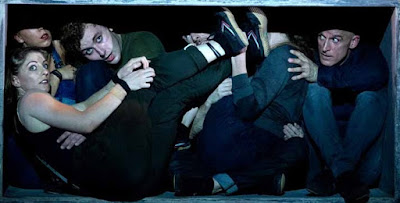 Circa's unconventional circus "Landscape with Monsters" swaps the flamboyant trappings of the circus for an everyday grunge, creating a sense that ordinary people are doing extraordinary things.

While the dim lighting and ominous projections are according to the blurbs for the show intended to convey "the story of post-industrial cities now in decay", the tone of the performance is set instead  by the wistful expressions of the performers as they clamber over each other and helplessly flirt.

This impish character is summed up by an early routine that has the entire cast squeezing onto a box in a game of "the floor is lava".

Boxes are a common prop in many of the acts - not abandoned skyscrapers in a desolate landscape, but objects of play.  They often have minds of their own, creeping and moving rather than collaborating with the performers.

By stripping circus of the big top aesthetic, the performance does rediscover a sense of risk.  While the performers are as nimble as you would expect, the clothes hide their physiques, and this gives frisson to the more death-defying routines, such as an impressive ladder balancing act.

Landscape with Monsters is relentlessly charming, but the light-hearted acts contrast strongly with the dim warehouse vibe, perhaps deliberately.  There is always a sense that any danger is pretend rather than genuine - a circus that performs without a net, but pretends none is necessary.

If there are any monsters in this landscape, it is a child playing Godzilla in a cardboard city.