The Exotic Lives of Lola Montez 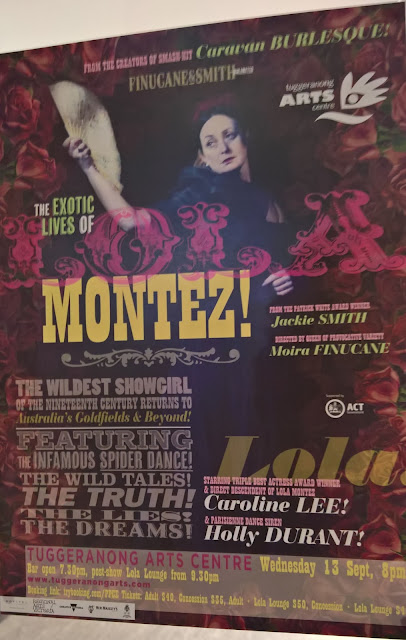 An evening of gathering in the bar from 7.30 pm, attending the stage performance by Caroline Lee as Lola and Holly Durant as a Parisienne Dance Siren, followed by the post-show Lola Lounge from 9.30 pm.

There are some very weird thoughts arising from Jackie Smith’s version of the true life of Lola Montez.  Did, for example, the Irishman George Bernard Shaw (I’ve just seen My Fair Lady) consciously or unconsciously name his Pygmalion heroine Eliza after Eliza Gilbert of County Sligo, the daughter of a very ordinary army officer, born in 1821, who became the extraordinary “Lola Montez”?  There’s real evidence parallel to Eliza Doolittle’s achievement in being recognised as a Hungarian princess in Eliza Gilbert’s love affair with King Ludwig of Bavaria, causing him to abdicate during the revolution of 1848.

How did Moira Finucane (whose name is the “reduced Anglicized form of Gaelic Ó Fionnmhacáin 'descendant of Fionnmhacán', from fionn 'fair' + the diminutive of mac 'son'”) come up with such extraordinary choreography?  Perhaps she and Holly Durant binge-watched YouTubes of Isadora Duncan (especially as danced by Vanessa Redgrave in the 1969 movie), picked up on the idea of Lola Montez’s Spider Dance (aka Tarantula, or Tarantella), and invented a manic fantasy version.

Manic seems to be the right word for Eliza Rosanna who told stories about her mother’s supposed Spanish origin when it is more likely that she was the illegitimate daughter of a wealthy Irish Member of Parliament; who gave herself Spanish Christian names Maria Dolores as well as the stage name Lola Montez; who claimed to have been the mistress of Franz Liszt, Alexandre Dumas, and Alexandre Dujarier, part-owner of La Presse; who really was given the title Countess Marie von Landsfeld by King Ludwig I; and who died as Mrs Eliza Gilbert (her father’s surname) when her first marriage was to Lieutenant Thomas James.

During her short lifetime she was variously described as determined as a child; kindly and friendly in her later years; but demanding and manipulative throughout.  Jackie Smith has very effectively used the device of our seeing her tell her stories and perform for us as if she is present today, revealing all those characteristics as she smiled and made us laugh while we could never quite be sure she was actually telling the truth.  Though she quoted the claims that she had died at various times, saying they were all ‘wrong’, she never mentioned her actual burial on 17 January 1861 in Greenwood cemetery, Brooklyn, reported a few days later in the New York Times.

The point was that Lola has never died because she represents the ‘new woman’ who made her own way in life against all the patriarchal conventions, and is therefore a model for women today who still face male domination every day.  Lola gave a tongue-lashing to men like me several times in the play.  Having reviewed Finucane & Smith's The Burlesque Hour (2009) and Glory Box (2012), I can see why they have given Lola Montez her rightful place in history.

I hope, though, that Moira, Jackie and Holly will take my criticism as praise, rather than literally whip-lash me as Lola was said to have done to the editor of the Ballarat Times in 1855.