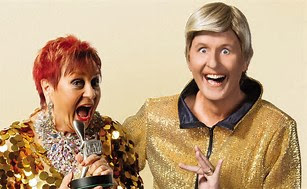 Nostalgia is a powerful elixir.  For those who can recall the golden age of television variety in Adelaide with Ann Wills and Ernie Sigley  bringing Adelaide Tonight into people’s living rooms, Adelaide Tonight with Bob Downe ( Mark Trevorrow’s camp creation) and Willsy is a heartwarming, fun-loving trip down memory lane. Nineteen time Logie winner Willsy and multi TV channeled golden-haired, golden clad entertainment favourite Bob Downe play host to an evening of variety and good clean and at times a mischievous touch of the  risqué .

For those old enough to remember, long forgotten TV commercials play on screens as the audience enter. It is a trip through time that sets the mood as Bert and Pattie spruik the glories of Pattie’s Safcol recipe and we are taken on a tour of favourite products such as the iconic Fruchocs and Hall’s drinks and mixers. The irrepressible, bright-eyed and delightfully cheeky Downe sporting his plastered blonde wig and trademark imitation gold lame outfit warms up the audience with jokes and repartee before septuagenarian Willsy enters with her usual bubbly flair, the one-time Channel Nine weather girl now turned cultural icon.

Each week of the festival, Downe and Willsy introduce three new guest artists to delight the audience. This week it is David Bowie interpreter and powerhouse performer Jeff Duff, singer and charismatic entertainer John O’Hara and the outrageously irreverent Trevor Ashley with his less than flattering Liza Minelli impersonation. Willsy and Downe bridge the intervals between acts with reminiscences of those good old days, songs and corny quips.

First to appear is Jeff Duff, dressed in a Chinese style  longcoat with traditional Chinese designs. Tall and pencil thin, the founder of the 1970 jazz-rock fusion band, Kush lets rip with a rendition of David Bowie’s Let’s Dance. In the intimate Spiegeltent his powerful tenor voice bursts through the rafters. With the fabulous backing of musical director Glenn Rhodes t the piano and his band, and dressed in a tight fitting multi-coloured leotard, under the Chinese coat, Duff shows that he can still hit the high notes with his parting rendition of Bowie’s iconic classic Life on Mars. The late legend would rise from his grave to hear Duff still paying tribute with a voice to raise the dead.

John O’Hara’s solo show Val:-A Campfire Kiki With Mother in recognition of the mother in Queer fell foul of Covid when his band was stranded in the Melbourne lockdown and he was in Perth. With the backing of the Adelaide Tonight Band, O’Hara was able to fly from Perth for an all too brief guest appearance at Adelaide Tonight with Bob Downe and Willsy. Bursting with energy and thrilling the audience , O’Hara  gives a powerhouse rendition of Lady Gaga’s Born This Way. It is an affirmation of identity and acceptance, and O’Hara is its perfect messenger.

Trevor Ashley is no stranger to Adelaide audiences, and it is apparent that he has a devoted following, who revel in his satirical impersonation of an overweight and neurotic Liza Minelli. But he ain’t no Liza, and his patter is often incomprehensible as he plays with the gulping mannerism of Liza’s distinctive vocals. His Broadway Baby has the oomph of a Minelli rendition, but it is cut short by his fussy interruption.  After a swipe at Delta Goodrem’s version of Memory from CATS , Ashley’s Liza then launches into a soulless rendition of the tortured Grizabella’s lament. An uninterrupted rendition of Broadway Baby would have been enough for me to applaud an entertainer who knew the mettle of his act.

No variety show would be complete without a prize for a member of the audience. With the clue that the number was between 18 and 20, a lucky audience member who had found a publicity shot of Bob Downe and Willsy under her chair was able to say that Willsy had won 19 logies and left the show with a box of goodies.

For just an hour, Bob Downe, Willsy and their guests served up a real treat for the audience that had come in from the cold and rainy night to revel in the memories of a time gone by which for one entertaining hour transported them to a world of entertainment and wholesome fun.  With a heap of humour, a ton of talent and an occasional touch of the tacky and the wacky, Adelaide Tonight with Bob Downe and Willsy is just the recipe to raise the spirits and warm the heart.

Posted by Canberra Critics Circle at 12:10 AM