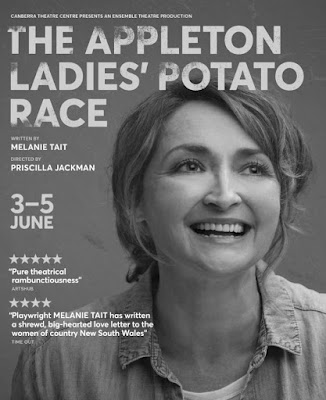 In “The Appleton Ladies’ Potato Race”, new doctor, Penny Anderson, has returned to her home town to set up practice.  She discovers that the potato race at the annual Appleton Show has a prize of $1000 for the men’s race and only $200 for the women’s race.

Pointing out the inequality between the prizes only meets with hostility and resistance from the town folk including, surprisingly, the women.

Long-lived community traditions and a fear of change keep this town clinging to the past but people arriving with different backgrounds and ideas are pushing the residents into the present.

Playwright, Melanie Tait, focusses on five women in this Australian close-knit country town.  Four of them have known each other all their lives but tensions surface between them over the potato race prize issue.  The fifth woman, originally from Saudi Arabia, has her own problems trying to fit in to this community.

A delightful comedy with very recognizable characters, the serious message underlying Melanie Tait’s play is all the more effective for its focus on the unexpected resistance to change by the women.

The production takes place around a rusty old ute at a crazy angle - a symbol of the town’s decay and the need for change.  Priscilla Jackman’s direction is well-paced, bright and visually pleasing.

Performances by the cast are superb with deeply drawn characterisations and a fine sense of comedy.

Sharon Millerchip as the doctor with fresh ideas, Valerie Bader as the hard-bitten elderly Bev Armstrong, Merridy Eastman as the excitable Aunt, Barb Ling, Sapidah Kian as the foreigner, Rania Hamid, and Amber McMahon as the tough but vulnerable, Nikki Armstrong, all give us very real women to relate to.

This is an amiable comedy with a subtle but effective message.  With its excellent cast and fine direction, this potato race is a winner all the way.

This review was first published in the Canberra City News digital edition of the 4 June 2021.