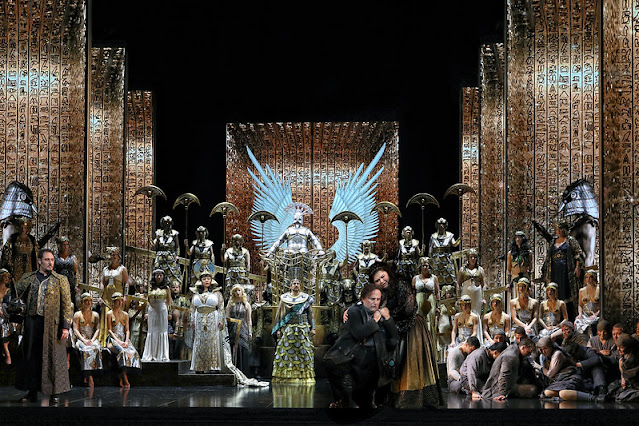 Conducted by Lorenzo Passerini – Directed and choreographed by Davide Livermore

When first premiered in 2018, Opera Australia’s digital production of Verdi’s “Aida” was hailed as the future of opera. The use of huge LED screens capable of displaying gorgeous images in remarkably high-definition to replace cumbersome conventional scenery signalled exciting possibilities, such as with the forthcoming season in Brisbane when this production of “Aida” will alternate in repertory between the operas in the Ring Cycle.

Even when first presented many who found the visual effects dazzling puzzled over some of the directorial and design decisions on the story-telling.

Yes, the singing in the original production was glorious, and in this 2021 revival no less so. Possibly some of the best operatic voices to be heard anywhere in the world including Leah Crocetto (Aida), Elena Gabouri (Amneris), Stefano La Colla (Radames), Warwick Fyfe (Amonasro), Daniel Sumegi (Ramfis), Gennadi Dubinsky (The King). As well, as we have come to expect from the Opera Australia chorus, the huge choruses were thrillingly sung and supported by the Opera Australia Orchestra under the baton of Lorenzo Passerini.

The direction for the singers in this production is very static, with little attempt at dramatic interpretation. Therefore it plays like a series of superbly sung, lavishly staged set-pieces, with little attention to the story-telling.

Maybe the director was distracted by the possibilities suggested by the technology, choosing visual effects over dramatic interpretation from his singers.  For instance a huge black panther appears behind Amneris, presumably to signal that she is up to no good.  Images of near-naked men move into the grand hall, salute, then retreat. They keep doing this, distractingly, even when the protagonists are arguing over the fate of Aida’s father. Why is Aida trying to persuade Radames to escape the heat of the desert sun and run away with her when they are both clearly standing on a cool, moonlit beach? No doubt once the visuals are chosen, it’s no easy matter to change them should they not create the desired mood.

There’s practically no physical contact or chemistry between any of the protagonists. For most of the opera they simply sit or stand and sing to the front, barely noting the presence of the other and rely on old-fashioned stock gestures to denote emotion.

Most of the movement is left to the team of hard-working dancers who unfortunately are saddled with some remarkably unattractive choreography to perform.

Despite these reservations there is much to enjoy which makes this production a “must see”.  Most memorably, the glorious singing of the principals and chorus, the visual overload present in some of the remarkably lavish set pieces, the beautiful LED visuals, and for this reviewer, the gentle, visually stunning, opening and closing sequences.