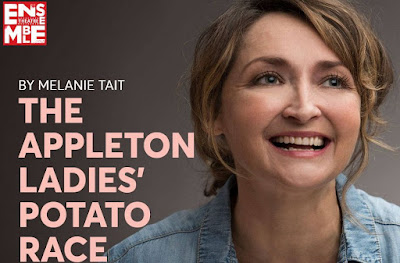 Entirely predictable and therefore thoroughly enjoyable, The Appleton Ladies’ Potato Race is a celebration of women’s equality.  As soon as we know that the winning man will receive $1000 and the winning woman only $200, we can be sure that the ending will be happy.

The mood is humorous and energetic from the beginning, entirely – of course – performed by women.

The play, written by Melanie Tait, is an autobiographical story about Tait’s return home to Robertstown, NSW, in 2018. The playwright and journalist discovered the town’s annual potato race awarded a $1000 prize to the winner of the men’s race, while victorious women only walked away with $200.

She started a Go Fund Me page to bring the women’s prize money up to be equal to the men’s and then wrote a play about it.
[Zoe Rice: https://indaily.com.au/inreview/theatre/2021/05/26/on-your-marks-for-the-appleton-ladies-potato-race/]

The real town, well-known to Canberrans, is Robertson on the Southern Highlands which sports The Big Potato:

I have to say, since I attended professional development courses in Robertson many years ago, I’m sure it’s a much more sophisticated place than Tait represents.  Coarse language is a major feature of the dialogue, and I can’t imagine the wreck of a fifties Holden ute would be left to dominate the scene:

But I wouldn’t doubt that sexism abounds as it does, after all, apparently even in the Australian Parliament and sports such as tennis, as the story of Naomi Osaka tells us.  The symbolism of the unfair Ladies’ Potato Race, laugh out loud funny though it is on stage, should not be missed.  Nor should the terrific performances of all the cast – an ensemble show in the true sense of The Ensemble Theatre.

A telling issue in the play, adding to the basic unfairness of the treatment of women, is the way social media is so destructive of community spirit, especially in a small town.  When the doctor, herself originally from the town and now returning with a ‘politically correct’ message about women’s rights, reads out-loud the attacking Facebook posts ‘liked’ by a sports-mad woman she had gone to school with, the language is disgusting, violent and literally shocking.  Of course, the ending is happy: reconciliation is possible, at least among these strong-minded women.

Some have called the play ‘heart-warming’ and I’m glad to say they are right.  But that scene told me I’m right to keep my social distance well away from ‘The Facebook’ virus.