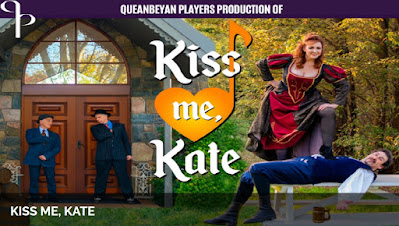 Book by Sam and Bella Spewack

Music and Lyrics by Cole Porter

The Q Theatre, Queanbeyan to 27 June

‘Kiss Me, Kate’ was Cole Porter’s longest running show on Broadway.  It opened in 1948 and ran for more than a thousand performances and won the first ever Tony Award for Best Musical.

A modern day theatre company is producing a musical version of Shakespeare’s, ‘The Taming of the Shrew’.  The conflict off-stage of the leading players, Fred Graham and his ex-wife, Lilli Vanessi, mirrors the antics of their on-stage characters, Petruchio and Katherine.  Complications arise when secondary performer, Bill Calhoun, involves the star, Fred Graham, in a gambling debt that results in a pair of gangsters arriving backstage.

Queanbeyan Players production of this classic musical is bright and full of energy with some outstanding performances.  Director, Michael Moore keeps it all moving swiftly, a challenge given the numerous scene changes, well-designed by Thompson Quan-Wing.

Janelle McMenamin gives a fine performance as Lilli/Katharine.  She brings unexpected and welcome warmth to the role, avoiding playing just a clichéd shrew.  She sang the contrasting songs, ‘So in Love’ and ‘I Hate Men’, very well.

Adam Best was suitably swaggering as Petruchio and the egotistical Fred Graham and was at his best vocally with ‘Where Is the Life That Late I Led?’ and the reprise of ‘So in Love’.

Samantha Marceddo as Lois/Bianca was a revelation in her delivery of the song, ‘Always True to You In My Fashion’.  This actress showed true star quality in her performance and deservedly stopped the show with this song.

The second act opening number, ‘Too Darn Hot’ was given a steamy rendition by Sarah Perruzza as Paula.  She also stopped the show with this number and it was the high point of the work by choreographer, Lauren Chapman, with excellent dancing that matched the mood of the song.

There were also strong performances by Nathan Patterson as Bill Calhoun/Lucentio and Chelsea Heaney  as Hattie.  The well-known Canberra performers, Dick Goldberg and David Cannell, know how to steal a scene and ‘Brush Up Your Shakespeare’ gave them the opportunity to do just that.  The audience loved them.

Musical director, Leisa Keen has done an excellent job preparing the orchestra and the singing by the leading players and strong ensemble.  Ian McLean conducted the orchestra with great spirit and energy.

The ear-splittingly loud sound design was more suitable for a rock concert than a Broadway show, making it difficult to hear Cole Porter’s clever and satirical lyrics over the booming on-stage orchestra.  If the loud sound is designed to meet a perceived audience expectation, they would have gained extra enjoyment from this show if given the chance to hear Cole Porter’s lyrics clearly.

It’s still a pleasing entertainment with lots to recommend in it.