You’ll laugh. You’ll sigh and you may even cry a little at Melanie Tait’s witty, heartwarming and thought provoking play about the Appleton Ladies’ Potato Race.  Set in the the Southern Highlands of New South Wales, Appleton is a small fictional country town that  for more than thirty years has held a ladies‘ potato race during the Appleton Show.  Tait’s portrayal of the life and people of the small community rings with authenticity and echoes with affection for her characters.

Central to the drama is the return of Penny Anderson (Sharon Millerchip) to her hometown as the town’s local GP.  While at the hair salon of her friend Nikki Armstrong (Amber McMahon) , Penny learns that the annual potato race offers a first place prize of $1000 to the men and $200 to the winning lady. This glaring inequity fires Penny’s feminist spirit and indignation at the injustice of the inequality between the sexes. Determined to set the balance right, Penny embarks on a campaign to raise money to equalize the contest. It is the mirror that reflects the ingrained attitudes and prejudices of a community resistant to change and clinging to the security of an unquestioned tradition. Tait’s skilfully interwoven plot exposes a 50 kilogram potato sack of issues that emerge from a script rippling with rib-tickling humour and thought-provoking insight.humour and thought-provoking insight. An excellent female cast, under Priscilla Jackman’s  snappy  direction, burst with contagious energy in a production that serves as a metaphor for small town politics. Designer Michael Scott Mitchell’s rusty old ute upon the stage sets the scene immediately and the true flavour of a potato growing country town. Bev Armstrong (Val Bader) resists any attempt to change the spirit or the rules of a race that is unique to her town. Nikki (Amber McMahon), a single mother of four children, has  won the ladies’ race year after year and resents Penny’s interference in the status quo. Rania (Sapidah Kian ), a Syrian refugee from war torn Aleppo loves the stability that avoids change in Australia, but from cruel experience recognizes the injustice of the race and joins Penny in her quest for equality. For Penny,a lesbian, the struggle becomes a bitter battle against the homophobia of the closeted community.

Tait is no one-eyed dramatic  activist.  With surgical skill she peels back the obvious to reveal the inner conflict. Bev Armstrong’s acerbic, forceful will conceals the pain of an incapacitated husband and a drug abused son. Bader’s performance of Bev perfectly captures the external force and the internal  commitment to her duty as a wife and mother.  McMahon’s  Nikki is a survivor, a battler who has come through and clings tenaciously to her winning glory. Merridy Eastman’s Barb appears the cheerful and compliant companion, concealing the pain of not being able to have children of her own  until the potato chips are down and she comes up trumps. It is Penny, the hometown outsider, who must endure the trolling and the abuse to triumph with another outsider Rania by her side.  Tait imbues her characters with unique identity and it is this that both appeals so wholeheartedly to her audience and enables each of her wonderful cast to embody the simplicity and the complexity of each character. The Appleton Ladies Potato Race is much more than a commentary on gender politics. It is a tapestry of human behaviour in all its guises. Tait, like Penny, looks at her country town with the wisdom and insight of the outsider who knows that one cannot act alone. 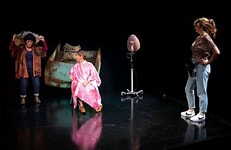 The Appleton Ladies’ Potato Race is a joyful romp, directed with flair and sensitivity and performed to perfection by a wonderful ensemble of female actors. Attitudes are revealed, feelings are exposed, conflicts erupt and arguments are resolved and solutions discovered  if only one will share the load. The applause rang out and the cries of approval echoed through The Playhouse of the Canberra Theatre Centre from an audience that had laughed uproariously, listened attentively and recognized themselves in part in Melanie Tait’s delightful comedy.

Posted by Canberra Critics Circle at 10:51 AM