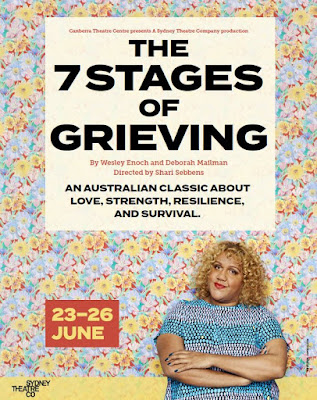 Tracing seven phases of Aboriginal history in one hour could seem to be a tall order for the creatives of ‘The 7 Stages Of Grieving’, but in this powerful play, the stories told, the strong acting and the fine production ensure the message of strength and survival comes through strongly.

Focussing on Dreaming, Invasion, Genocide, Protection, Assimilation, Self-Determination, and Reconciliation, writers Wesley Enoch and Deborah Mailman don’t flinch from telling stories of horror and injustice in an often unsettling mix of humour, anger and music.  They reach out to the audience to share the pain and the emotional turmoil, moving toward a greater understanding and ultimate coming together.

Helpmann Award-winning actress, Elaine Crombie, is the woman who takes us on this journey.  Her solo performance engages the audience immediately with her commanding presence, dramatic skills, comic timing and fine singing voice.  Switching from comedy to drama and back again, her heartfelt performance is extraordinary.

The play was first presented successfully in 1995 and this production includes new scenes added to show what has changed in the 26 years since then.  It’s clear that assimilation, self-determination, and reconciliation still have a long way to go.

The attractive setting designed by Elizabeth Gadsby gives a powerful sense of the land and the lighting design by Verity Hampson and sound design by Steve Francis add considerable atmosphere to the show.

Director, Shari Stebbens, has ensured that the production is well-paced and visually interesting as well as enabling the actress to develop and maintain her strongly in-depth performance.

The play certainly helps us to understand what it means to be an Aboriginal woman in contemporary Australia.  Elaine Crombie’s electrifying performance in this memorable play will long be remembered.