"The 7 Stages of Grieving," Shari Sebbens, original script by Wesley Enoch and Deborah Mailman, Sydney Theatre Company at the Playhouse until June 26. Reviewed by PHILLIP MACKENZIE. 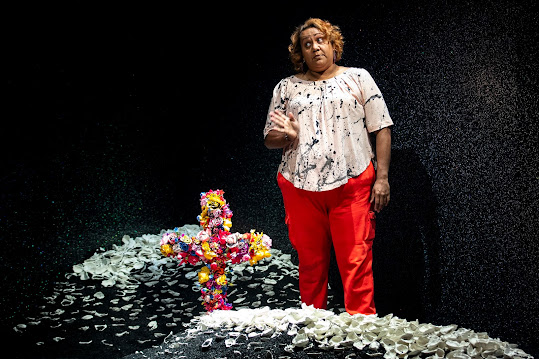 Elaine Crombie in “The 7 Stages of Grieving,” Photo: Joseph Mayers

WHILE the title of the play borrows something  from Elisabeth Kubler-Ross's “Five Stages of Grieving,” the essential theme is that of a cultural and historical, rather than the personal, experience dealt with by Kubler-Ross.

Elizabeth Gadsby's set, on the open stage, consists of several mounds suggestive of middens made by people over millennia, but now little more than archaeological curiosities, as well as, on stage right, serving as Grandma's grave with its colourful floral tributes.

Stage left is an enigmatic worn suitcase which plays a major part later in the show. The backdrop screen shows the arriving audience a range of dates, emphasising the 233 years throughout which, despite ravages of disease, massacre, and missionaries,  the First Nations have survived and are now re-asserting themselves.

The play has undergone an extended gestation from its original showing in 1995, through a continuing process of rewriting and updating which is testament to the gradual (and still incomplete) enlightenment of both major cultural streams of modern-day Australia.

In its present form the play, engagingly presented to us by Elaine Crombie, leads us on a from the point of view of traditional, cultural/historical and personal experiences, through Australia's history from  the arrival of the First Fleet to the present day.

While publicity might have created the expectation that, beginning 233 years ago, we would be witness to the First Nations'  experience of shock/denial; pain and grief; anger and bargaining; depression; upward prospects; reconstruction; and to acceptance/hope, instead, we are shown, in vivid anecdotes, how all these elements have created the present, but can offer an element of hope for the future.

The Harbour Bridge march is given its due, but Uluru, “treaty” and constitutional change, are not mentioned. Sufficient for the government of the day is the evil thereof?

In the space of an hour or so, Elaine Crombie's performance is nothing short of superb: she, alone, creates a wide range of entirely human and believable characters, while never losing her own persona – sympathetic, tragic, immersed in her cultural origins, but full of life and a sense of the ridiculous that is essential to the survival of herself and her widely extended family.

From the kid playing a traditional form of hop-scotch, to a ballad singer inviting a willing audience to hum along with her, or to clap to the rhythm of the multitude (6,000?) marching silently in mourning for the loss of one young man, to the raucous spangled performance in a mass concert, Crombie never misses a beat, keening for the loss of her Grandma, but never missing the chance to take the mickey with a wry smile or wink to the mob of bros (black or white) in her audience.

Crombie is brilliantly supported by her director Shari Sebbens, in the lighting by Mark Pennington. And the stunning sound by Steve Francis.

Will there be an "Eighth Stage of Grieving"? Copyright notwithstanding, the basic text, while retaining its standing as an important contribution to Australia's ongoing cultural debate, is surely robust enough to incorporate further revisions as the historical process continues.

“The 7 Stages of Grieving”  is a welcome inclusion in the Theatre Centre's current program.  Canberrans – white, black or in between – should not miss the chance to see this most gripping, yet entertaining, history lesson.

Posted by Canberra Critics Circle at 1:09 AM