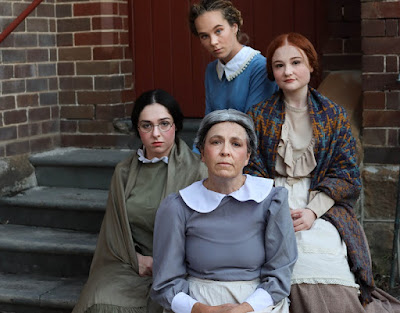 "THE  Lost Voice of Anne Bronte" is a vigorous piece about the turbulent lives of the Bronte sisters and the restrictions placed upon them as 19th century women.

There’s Emily  (Laura Cameron), who created the love story of Cathy and Heathcliff in her novel Wuthering Heights. There’s Charlotte (Heather Heige) who is probably best remembered for Jane Eyre. Then there’s Anne (Casey Anne Martin) and it might be a struggle to remember that she wrote The Tenant of Wildfell Hall. Wuthering Heights and Jane Eyre are more likely to still have a chance of turning up in classrooms.

That makes for a difficulty in making the case for Anne’s voice but the play does a good job of evoking the claustrophobic West Yorkshire parsonage at Haworth and the social mores that made the sisters what they became. They are women, educated only up to a point and allowed to hire themselves out with mixed success as governesses.

Their father the widowed Reverend Patrick Bronte (Leofric Kingsford-Smith) is investing resources in the only son, Branwell (Alex Driscoll). Not a good idea, as Branwell is into drink and drugs and generally dissipating any talents he might have. It’s ironically the three sisters who will have the staying power.

The cast does a solid job of setting up and sustaining the resulting tensions. Lost loves, local lore from servant Tabitha (Belinda Delaney) and quite a bit of walking around the dining table build up an atmosphere. (I’ve been to Haworth and those rooms are tiny.)

There are fine performances from Cameron as the passionate and imaginative Emily and Heige as the pragmatic and bossy Charlotte. Martin as the less outgoing Anne is a sensitive presence in her closing scenes.

And of course there’s a sense of pandemic doom hanging over them all. They are carried off mostly by disease curable today. The play depends a little too much on the audience knowing the story (and why The Tenant of Wildfell Hall might be seen as more feminist than Jane Eyre) but it has the sense to stop at the point where Charlotte, her sisters dead,  is on the brink of marriage to her father’s curate.

A thoughtful and worthwhile look at the Brontes that might well send an audience  off to look for Anne Bronte’s ‘lost voice’.

Posted by Canberra Critics Circle at 10:16 AM