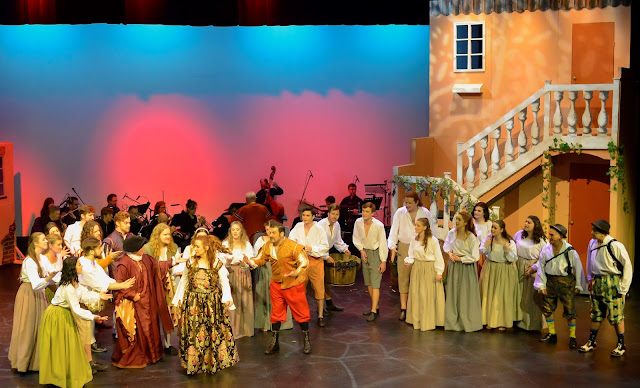 Directed by Michael Moore - Musical Direction by Leisa Keen
Conducted by Ian McLean AM, CSC - Choreographed by Lauren (Laurenzy) Chapman
Costumes designed by Rhiannon De Margheriti - Set Designed by Thompson Quan-Wing
The Q,  The Queanbeyan Performing Arts Centre from 17th to 27th June.
Opening night performance reviewed by Bill Stephens
It’s a brave director who tampers with a masterpiece, and “Kiss me Kate” is generally regarded as Cole Porter’s masterpiece. Originally set in the 1940’s “Kiss me Kate” is a musical about a theatre company touring a production of Shakespeare’s “The Taming of the Shrew” in which the leading man, and director of that production, just happens to be the owner of the touring company, and his leading lady just happens to be his ex-wife. Their spiteful barbs and arguments continue into their on-stage performances, mimicking the characters in Shakespeare’s play with hilarious results.
It’s doubtful if Porter had political correctness in mind when he wrote the glorious score for this show. He was probably more intent on crafting his next big Broadway musical having hit upon the brilliant idea of riffing on Shakespeare’s play.
However, Director, Michael Moore has moved his production of “Kiss Me Kate” into the present day, swapped the genders of some of the characters, and tinkered with the dialogue and lyrics to include references to current events. All of which works a treat.
Musical Director, Leisa Keen, has refreshed Porters score with some brilliant jazz-inflected musical arrangements and put together a razor-sharp, on-stage band for Ian McLean to lead with all his considerable finesse. Porter may have had some quibbles about the changes to his lyrics, but he would have loved this band.
Thompson Quan-Wing has again designed a clever flexible setting which manages to accommodate the on-stage orchestra, and off-stage/on-stage requirements of the storyline and still leave plenty of room for the large cast to execute Lauren (Laurenzy) Chapmen’s spectacular dance routines with gusto. So much so that the efficiently executed set changes become an additional highlight. Rhiannon De Margheriti’s costumes are generally attractive, though a more flattering solution than the revealing gym wear for the female ensemble which detracted from Sarah Perruzza’s dynamic performance of “Too Darn Hot” might have been wiser.
Janelle McMenamin and Fred Graham are well-teamed as the squabbling thespians, Lilli Vanessi and Fred Graham. Both sing and act well and capture just the right amount of differentiation between their on-stage and off-stage characters. Samantha Marceddo as the brassy chorus girl, Lois Lane, and Nathanael Patterson as her ne’er-do- well beau, Bill Calhoun, also do well in their roles, Marceddo providing a particular highlight with her feisty rendition of “Always True to You in My Fashion”.
Supporting performances among the large cast are uniformly good. Brian Kavanagh was particularly outstanding as the all-American General Harrison Howell, and Tony D’Abrera contributes a delightful turn in dual roles of Harry/Baptista. Dimitri Yialelogluo, Daniel Evans, Tobias Price and Kristofer Patston-Gill offer some eye-catching acrobatics and Chelsea Heaney gets the show off to a great start leading the ensemble with her ballsy rendition of “Another Op’nin, Another Show”.
But it’s Dick Goldberg and David “Dogbox” Cannell who run away with the show as the two delightful gangsters who unexpectedly find themselves in showbiz. Their performance of “Brush Up Your Shakespeare” alone is worth the price of admission.
Indeed they managed to pre-empt this reviewer with their own review of the show, “Oh, it’ll run. It’s entertaining, vivacious and calculated to please the discerning theatre-goer. You can quote me on that. Mr Bill Stephens”. What more can I say?
Photos by Kaitlyn Boye
This review first published in the digital edition of CITY NEWS on 19th June 2021.
Posted by Canberra Critics Circle at 1:44 PM