In their first concert since the easing of COVID restrictions, the LGBTIQ+ Canberra Qwire presented “Rise Up!’, a celebration of hope and resilience.  Dressed all in black with some tasteful additional sparkle, the choir looked smart and well-presented.

The performance commenced with the “Welcome to Country” read by Cheyne Halloran.  This was followed by “State of Alert” which was conducted by the Qwire’s Assistant Musical Director and one of the composers of the work, Jenny Sawer.

This rousing opening set the tone for the rest of the concert.  It was accompanied by a Coordinate video composed of images of Qwire members singing in a past Zoom presentation as well as moving images of last year’s bushfires.

Master of Ceremonies for the program was ABC Radio’s Adrienne Francis, who gave bright and interesting observations about the songs to be heard. 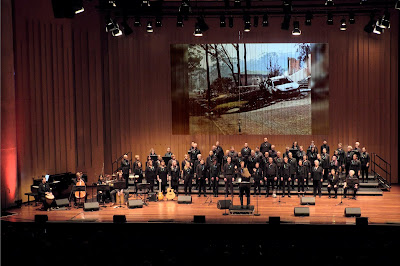 The first song by Bill Douglas, “The Cloud”, was a haunting work sung by the choir with a rich sound and a pleasing depth to the vocal parts.  Highlights of the first half of the concert included “Washing Of The Water” by Peter Gabriel and “And So It Goes” by Billy Joel.  “Fields of Gold” by Sting was also well sung and had a particularly fine accompaniment on piano by Jessica Stewart.

The first half of the program concluded with a rousing arrangement of “I Will Survive” by Freddie Perren and Dino Fekaris.  Choir members clearly enjoyed singing this popular song.

The remainder of the concert after interval included a moving version of “Sure On This Shining Night” by Morten Lauridsen, based on a poem by James Agee.  Soprano, Chloe McKenzie, sang the solo passages of this work beautifully.

Other highlights of the second half included “What A Wonderful World” by Bob Thiele and George David Weiss and originally made famous by Louis Armstrong, “How Can I Keep From Singing?” by Robert Lowry and a vibrant finale with “From Now On” by Benj Pasek and Justin Paul from the film, “The Greatest Showman”.

This well-attended concert was a welcome return for the Qwire and they fully deserved the appreciative audience response they received at the program’s conclusion.

This review was first published in the Canberra City News digital edition of the 21 June 2021.