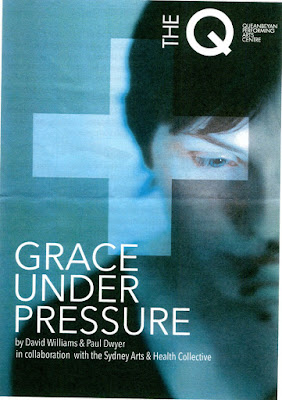 Grace Under Pressure by David Williams and Paul Dwyer, in collaboration with the Sydney Arts & Health Collective.  At The Q, Queanbeyan Performing Arts Centre, June 10 – 12, 2021.

Grace Under Pressure is theatre, plain and simple.  Apart from the microphones, stage spotlighting and a quiet amorphous background recorded soundscape, these could have been four from our community who have come forward around our campfire to tell us their stories of what happened on their long arduous journey.  Sometimes one takes the foreground; then two may tell a story together; or someone listening may ask a question, and get a couple of different responses.  There were times of worry, times of success, times of friction and others of happiness, until all four come forward together to tell about the end: about the beauty and practical reality of dying.

Perhaps this is how theatre began, telling such stories honestly and openly, without performing for effect, maybe 300,000 years ago in Africa as our species found their voice.  And still today, in The Q, the elemental drama of telling stories works wonderfully.

The purpose of the storytelling is ostensibly to “open a broader public conversation about some of the persistent workplace issues facing health workers”, using verbatim material from “around 30 people – physicians, surgeons, interns, registrars, nurses, a paramedic, a hospital administrator and even a union official” ranging in “ages (from mid-20s to early 70s) and experience levels (from medical students to recently retired)”.

So each of the four performers take on many different “characters” as they reproduce the interviewees’ stories.  There is no clear storyline, but the drama is created by the way the stories have been selected and often interrelated, so that the mood and our feelings change through the 85 minutes of determination, worry, unexpected humour, success against seemingly impossible odds, fear and insecurity, and yet, finally, warmth and a tremendous sense of the humanity and self-sacrifice of those who do so much for everyone else’s benefit.

Grace Under Pressure presents us with the drama of life and death.  It is not a politicised campaign for better conditions but a revelation of reality more powerful than confronting street protest or petitions.  The tour across the country “has been assisted by the Australian government through the Department of Communication and the Arts’ Catalyst – Australian Arts and Culture Fund…and assisted by the Restart Investment to Sustain and Expand (RISE) Fund – an Australian Government initiative.”

We can only hope that Members of Parliament have their eyes opened by Grace Under Pressure, and find creative ways to legislate and fund what is needed to make these stories able to focus more on the satisfaction and success side of the equation than on the worry and how to cope aspects of these extraordinary real life performers.

Perhaps the tour should include a performance in Parliament House.  I will suggest it to my local member.