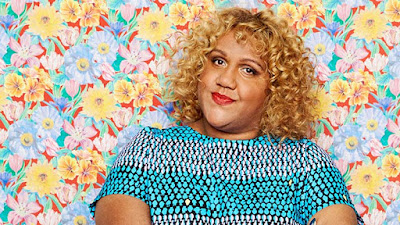 Twenty five years have passed since I wrote of Wesley Enoch and Deborah Mailman’s  iconic drama The 7 Stages of Grieving  “Here is a story that needs to be told. It is the tale of a people who need to be heard.” As I sat in The Playhouse, watching Elaine Crombie’s remarkable and powerfully moving performance I couldn’t help thinking “What does it take? What does it take for politicians, ordinary people and the whole of society to listen, to hear and to act, especially to act?

The 7 Stages of Grieving is one indigenous woman’s account of her experience and the experiences of her people. Its scope is as vast as the land on which its indigenous people have lived for more than forty thousand years. It is a tale of the First Nation people and their deep connection to the land, their culture and the stories that they have passed down through the generations.  It is a story of grief, of loss, of isolation and desperation, of displacement and abuse and injustice. It is a tale of grieving for the loss of a beloved grandmother who loved to sing Delta Dawn and took her stories to the grave. It is a story of the horrible consequences of the stolen generation and its tearing apart of a people’s customs and well-founded laws. It is the cruel account of death in custody and the shaming of a young aboriginal who was defending his innocent mate. It is a shocking indictment of the white people’s judicial system and the officers of the white man’s law. Crombie’s passions erupt with volcanic force as she recounts the 1993 incident of Musgrave Park at which a 19 year old aboriginal lad died while under the control of the police.  On the screen hundreds of cases of deaths in custody flash before our eyes from as long ago as the founding of Federation.

Writers Wesley Enoch and Deborah Mailman and performer Crombie are masterful storytellers. Crombie is both comedian and tragedian. We laugh at her cheeky irreverent humour, applaud her rumbustious stand-up comedy routine and we weep at her insufferable grief as she gazes upon the photos of dead ancestors in a worn old brown leather suitcase.  The symbol of loss is palpable as she sits among the mounds of earth and the spirits of the dead. A smoking ceremony above her grandmother’s grave wards off the bad spirits, and as the story of her people unfolds in laughter and tears, I am startlingly reminded of the loss brought about by a people who neither understood nor cared.

But, as Crombie reminds us “We can’t go back” and “Everything has its time”. But how did we get to “wreck con silly nation” from the ideals of reconciliation? What has become of the Uluru Statement From The Heart and Crombie’s enthusiastic account of the hopeful Walk For Reconciliation across the Sydney Harbour Bridge twenty one years ago?

Crombie is the supreme storyteller.  Under the direction of Richard Wherret Fellow, Shari Sebbens, Crombie plays out her story of survival and resilience. She lights up the stage with her vivacity, passion and fervour.  She arouses emotions but more than that she provokes her audience to think and remember a proud culture, genocide, injustice and ultimately survival. But thinking is not enough. Crombie exhorts her audience “to do!” She leaves her audience with seven acts to perform. They are: 1. Sign the petition to #raisetheage 2. Sign the petition to #banspithoods 3. Follow @indigenousx on Twitter 4. Follow @seedmob on Instagram 5. Donate to Sisters Inside 6. Donate to Black Rainbow. Number 7 is TURN UP

Mailman and Enoch’s plea for tolerance, acceptance and justice has seen changes over the past quarter of a century. It is now for us all to be impassioned and enlightened by Crombie’s brilliant retelling of The 7 Stages of Grieving so that we never go back and ensure that now is the time.

It is time for The 7 Stages of Grieving to return. This stirring production from the heart cries out for action. It is not to be missed.