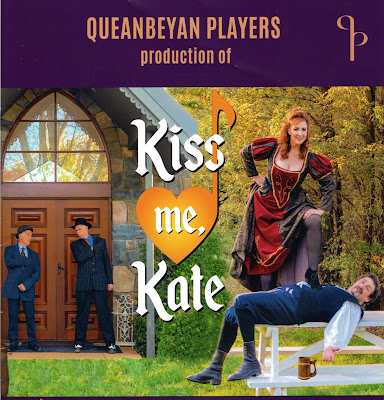 Kiss Me, Kate.  Music & Lyrics by Cole Porter; book by Sam & Bella Spewack.  Based on the 1999 revival directed by Michael Blakemore, choreographed by Kathleen Marshall.

Even though I’ve never seen the stage, film or television versions of Kiss Me, Kate before, I seemed to know all about it – by osmosis, I guess from the so-recognisable Cole Porter songs.  After all, it played more than 1000 times on Broadway.  Queanbeyan Players’ excellent production has brought me up to date, to 1948!

Except I discovered the real reason why Lilli decides that General Harrison Howell is not what she needs after all.  It’s not just that he’s a proto-family-violence creep, but he’s a close friend and advisor to President Trump!  No wonder she realises that despite Fred / Petruchio’s challenging behaviour, with a slightly-off sense of humour, as Lilli and Kate she has more in common with him because they are both actors at heart.

The best thing I learnt from Queanbeyan Players’ Kiss Me, Kate was to have fun enjoying a comedy.  I often had wondered whether Shakespeare intended (or actually directed) The Taming of the Shrew to be a comedy.  The post-World War II irreverence of Kiss Me, Kate, which the Players captured beautifully, made it clear.  The whole play is a kind of joke, until Act V Scene 1.

As the conflict between Vincentio and Biondello reaches the stage of stupidity, Petruchio says privately “Prithee, Kate, let’s stand aside, and see the end of this controversy.”  This is the first time Petruchio is straight with Katharine.  This is the turning point in their relationship.  After watching more stupidity, they – in contrast – come together in common sense.  Katharine controls the matter of the kissing, and of staying rather than going home as Petruchio suggests.

This is a small but important moment in Shakespeare’s play which is parallel to the moment Kate realises in Kiss Me, Kate that General Harrison Howell is stupid, and Fred is the right choice after all.  However, I still think the soft music mood of Cole Porter’s final song by Kate, I Am Ashamed That People Are So Simple, misses the deliberate irony in Shakespeare’s much longer speech by Katharine, where it’s plain that for her Petruchio is not “[my] husband  [who] is [my] lord, [my] king, [my] governor” and she certainly is not ashamed about the way she has done all those things that, conventionally, women are not supposed to do.

It is because she has stood up for herself and comes to Petruchio (as Lilli does to Fred) as an equal, that Petruchio can say, equally ironically, “Why, there’s a wench!” and then recognise that she has the power to choose to “Come on, and kiss me, Kate.”

As to the quality of the Queanbeyan Players’ production, on the relatively small stage in The Q, they had everything right.

The 14 piece band, conducted in an amazingly low-key manner by Ian McLean, easily created the effect of an American Big Band, while making sure that each member had standout moments, especially in jazz sequences.  Fortunately, The Q Theatre has excellent acoustics, and McLean used every opportunity to give us the variety of mood and style needed to keep the show moving – as much during scene changes as during the action.

Acting, singing and dancing throughout were excellent.  Though the company may not be formally classed as professional, the important qualities of detail and tremendous cooperative teamwork, including the stage management, in this production made this Kiss Me, Kate as professional in effect as anyone could wish for.  I could pick any number of the cast for special mention in their larger and smaller roles, but it’s important to say that the directing and performances of Janelle McMenamin as Lilli / Kate, with solid backing from Adam Best as Fred / Petruchio, and Dick Goldberg and David “Dogbox” Cannell as the very funny couple of gangsters were highlights for me.


In other words do yourself a favour and see Kiss Me, Kate by the Queanbeyan Players at The Q this week. https://theq.net.au/whats-on/productions/kiss-me-kate/
Posted by Canberra Critics Circle at 4:49 PM