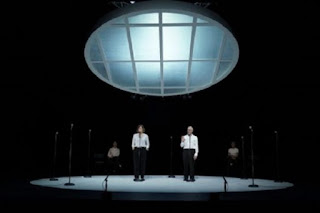 THE stage is set: a plain oval dais, lit from above by a translucent light such as we might see from the perspective of a patient on an operating table (subtle lighting design by Nick Higgins).

On the floor stand 10 or so microphones. An unobtrusive soundscape (by Gale Priest) plays throughout the action, only rising to a perceptible, sombre yet liberating tone in the final moments of this performance.

The actors – three women and one man – enter and take their seats upstage of the dais.

Throughout the next 90 minutes, they will take on a wide variety of personas, scripted from the contributions of real people whom the writers (David Williams and Paul Dwyer) had interviewed.

Their experiences have been blended into a mosaic of anecdotes depicting the trials, tribulations, failures and successes experienced by student and qualified nurses, doctors and surgeons. They’re facing the stresses of ordinary people who have committed themselves to the service of the ill, the injured, the women in labour and the dying.

This is not a play in the usual theatrical sense – there is no plot with a beginning, middle and end; nor is there more than a touch of dramatic interaction between the multitudinous characters. It is, rather, a collation of anecdotes and emotions in which the actors describe what it is like to work in the hot-house environment of large city, and small regional, hospitals. An extra dimension or contrast might have been achieved if the scope had extended to the work of local GPs or clinics.

Many, many years ago we laughed fit to die at the British “Carry On Doctor” films.

Here in “Grace Under Pressure”, the fare is lightened by the occasional comedic episode but the burden of the stories is the reality that is hidden under the jolly capers: the unbelievable hours demanded of those committed to curing the sick or selflessly suffering with them in extremis, the hierarchical structures, the professional and unprofessional behaviour of humans of whom too much is expected.

The four performers were Emily Taylor, Sal Sharah, Tanya Schneider and Meg Dunn. They each represented so many, and such a wide variety of nurses, doctors, paramedics and others at various stages of their careers, that it is impossible for this reviewer to comment on individual performances – sufficient to say that never once do they convey anything but the depth of truth and passion of those whose stories they are recreating.

While this is not a play, neither is it a didactic or propagandising lecture, and it is readily digestible for a lay audience, but the question may be put as to whether its real value might lie in holding the mirror up to an audience of the professions portrayed on stage, as well as the relevant politicians and administrators who could make a difference.