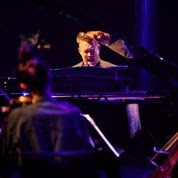 Pardon the pun but Introspective really was a perfect night at the Adelaide Cabaret Festival.  For just over an hour Eddie Perfect, accompanied on stage by violinist Xani Kolac and cellist Anita Quayle entertained an enthusiastic audience with stories of his experiences while working on Beetlejuice the Musical and King Kong the Musical. It is a fascinating, absorbing and thoroughly entertaining tale of a Frankston lad in the entertainment heart of the Big Apple. And yet there is a sense as Eddie relates his experiences with Broadway producers, directors, audiences and critics as well as a cranky 80 year old neighbor that Perfect was still the Melbourne musical comedy creator in the court of New York.

Throughout the show, Perfect relives his experiences from living on the Upper West Side of Manhattan with his family to the disappointments with the musical King Kong and the surprising ups and downs of  Beetlejuice the Musical. Opening his show with Taking Out The Bin, Eddie sets the scene as a newcomer to the Big Apple. He then takes the audience through his showbiz life on Broadway from the disappointing reception by audiences and critics to the ambitiously staged King Kong the Musical. New Yorkers let their feelings be known when the lady next to puppetry director Gavin Robbins turned and said “Can you Believe this shit?”  His guilt at not spending enough time with his family is also reflected in Beetlejuice the Musical with a beautiful plea by Lydia to her father in A Little More of Your Time. It is in the numbers for Beetlejuice the Musical that Perfect’s rare talent shines through. The trials and tribulations of working on a musical that, like the fledgling in the park, risks death on the streets of the city keeps Perfect’s hopes alive and he is ultimately rewarded when Beetlejuice the Musical receives nominations for the Tony Awards. The rest is history. Perfect writes a tongue in cheek version of the opening number of the show and it goes viral with the aid of CBS and a show that was struggling to bring in the crowds raked in the Tonys and played to packed houses until the Pandemic choked the city, as the fires did in Australia when he wrote the song for Kylie Minogue’s Tourism ad. It is fitting that he should sing his anthem to his homeland, Australia, as a stirring heart-felt close to the show.

Introspective is an honest, revealing, often funny and intimate confession of the life of an entertainer. Perfect is the master storyteller and raconteur. He suffers the slings and arrows of outrageous failure while also having well-deserved greatness thrust upon him. Interspersed with original songs from his musicals and his life on Broadway, are the stories of an artist’s everyday life, its highs and lows, its struggles and its successes. And it is the success that Perfect finds more difficult to handle. Bathed in success, he still confronts the insecurities of the entertainer, especially at the hands of critics, who can be vicious in New York, That is why Perfect is ready to get his own back with a show about a Shakespearian actor who sets out to murder his unfair critics. A rousing, full-blooded number from the show still in the making, Dead Critic, ends with a triumphant “Vengeance will be mine!” So, critics of Perfect’s shows beware!

There really is no need. Introspective is a fabulously conceived and performed insight into the artist’s life - at times raw and vulnerable, at other times elated by success, but always an honest expression of a wonderfully talented and versatile lad from Mentone.

All too soon, the show is over and Perfect with his immensely talented Kolac and Quayle vanish into the wings to be returned to quarantine before emerging a day later for the next show.  We live in an uncertain time, but that is the artist’s lot, and three extraordinary and dedicated artists will again delight audiences to Introspective the following night. If this show ever comes your way, get your tickets while you can. It’s not to be missed.

Posted by Canberra Critics Circle at 11:23 AM