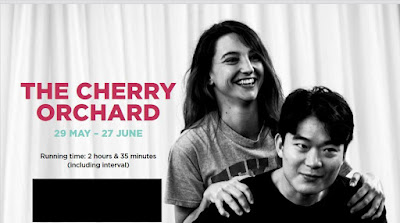 Previewed by Frank McKone
May 29


When you see Eamon Flack’s presentation of Anton Chekhov’s The Cherry Orchard, don’t expect a museum exhibit of decaying Russia in 1904.  Remember that, sadly, Chekhov was very disappointed with the first production:

It opened at the Moscow Art Theatre on 17 January 1904 in a production directed by Konstantin Stanislavski. Chekhov described the play as a comedy, with some elements of farce, though Stanislavski treated it as a tragedy. Since its first production, directors have contended with its dual nature.
https://en.wikipedia.org/wiki/The_Cherry_Orchard

This Belvoir production is nothing like the usual approach in what has become one of the most popular plays for amateur companies.  A nice example is on YouTube at https://www.youtube.com/watch?v=OI9x6b8Vdow recorded at Northeastern Illinois University in Chicago, Illinois, on October 17 & 18, 2013.

Flack has “set our production not in Russia but in ‘Rushia’, and not in 1904 but ‘now’, which is a time somewhere between the last and the next hundred years.”  As the cast shows, this means in a multicultural society which could be modern Australia – or the world.

Well before his time, facing dying from tuberculosis, Chekhov saw the absurdity of people who believe that life should and would go on forever ‘as we know it’.  His comedy is black – terribly funny.  In this, surely the most highly energetic production imaginable, you’ll be surprised – and thoroughly engaged – by the wild choreography of movement, the frantic singing and dancing, the extremes of laughter and tears.  After all, this is the end of these characters’ world as they think they know it.

But Flack has also “contended with its dual nature”.  He has not fallen into Stanislavski’s trap.  To drag acting out of 19th Century melodrama, Stanislavski has been essential for showing us how to make acting ‘realistic’, developing his theory and practice from about the time he directed The Cherry Orchard, seeking to express directly the tragedy.

Flack has understood Chekhov’s desire to show the tragedy obliquely by emphasising the absurdity of the character’s behaviour.  So the audience ends up laughing at them – but bit by bit realising we are losing our personal cherry orchards every day.

This is an exciting presentation of The Cherry Orchard to watch, and thoughtful on reflection – and highly recommended.

Note for Chekhov enthusiasts: The original cast list in The Portable Chekhov (Penguin/Viking 1947)

Posted by Canberra Critics Circle at 11:48 AM