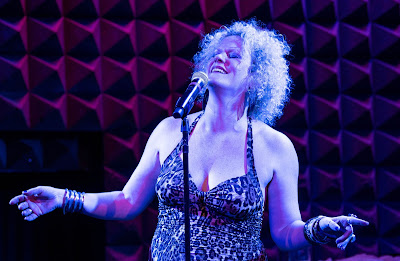 There can only be one Divine Miss M. But if anyone is to pay tribute to the bold and brassy, fierce and feisty, deliciously rude and raunchy Bette Midler of those early Bathhouse years, it is the irrepressible, outrageously magnificent Amber Martin.  Striding the small and intimate Spiegeltent stage with unleashed and explosive energy, Martin’s You’ve Got To Have Friends is the embodiment of the spirit of the one and only Bette. Her show Bathhouse Bette is not a foolish attempt at impersonation but rather a devoted portrayal of a much loved idol and artistic inspiration. With her bright blue eyes ablaze with manic force and her blonde hair splayed from her head, Martin in a sleek black low cut dress launches into her act with all the passion and fervor of a diva’s diva.

Martin’s repertoire ranges from Bette’s early numbers that she performed at Steve Ostrow’s Continental, New York’s gay bathhouse to her association with singer, mentor and record producer Barry Manilow. With a voice that can growl through You’ve Got To Have Friends, launch an assault with You Told Me You Loved Me Baby or touch the air with a voice of smoothest silk and soul in her still rendition of Tom Waits’ Martha. 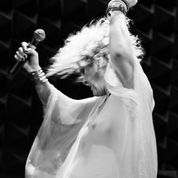 Martin’s range is awesome, from the unrestrained rock and roll to the svelte felt love song and the deep throated Blues. And it wouldn’t be a show about Bette without the not so subtle innuendo, Sophie Tucker jokes and a couple of shock surprises along the way.  Martin notches up the rude and the crude with a surprising and ridiculously raunchy 1936 Blues number by Afro-American female Blues singer, Lucille Bogan. Shave ‘Em Dry begins, I got nipples on my titties and it just gets bluer and rougher from there.

After expressing her love for the audience, her gift, she gives her final gift to the audience, accompanied on piano by Henry Kapersky, on guitar, Tim Wilson and on drums, Paul Butler. The early years shaped Bette Midler’s career, inspired by  the likes of Barry Manilow and Tom Waits and it is fitting that Martin should close her act with a rearranged cover of Bob Dylan’s I shall be released with the adapted lyrics, They say every woman needs protection and Any day now I shall be released. It’s the final affirmation of strength and the power of Bette Midler to be her own woman.  Martin too is her own woman, riding high on the wings of her idol and carrying her inspiration to audiences who stood for an ovation. Martin gave us all a tribute that made us wanna dance.

Posted by Canberra Critics Circle at 11:50 AM