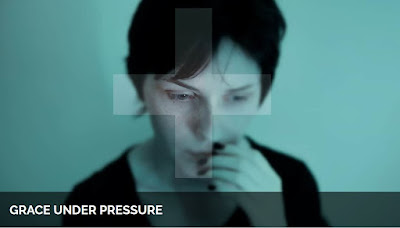 In Collaboration With The Sydney Arts & Health Collective

The Q Theatre, Queanbeyan to 12 June

In ‘Grace Under Pressure’, verbatim theatre makers David Williams and Paul Dwyer have put together an unsettling production that looks at the workplace and training cultures in the health system that are affecting young health professionals and potentially putting the lives of patients at risk.

The play is the initiative of the Sydney Arts and Health Collective – a group of multi-school Sydney academics from Nursing, Public Health, Brain and Mind Centre, Medical Education, Performing Arts, Sydney Health Ethics, Seymour Centre and Brain and Mind Centre.  It’s part of a larger research project examining the culture of healthcare training and exploring positive ways to counter many of the known negative impacts on the health and well-being of trainees.

The play shows that, while medicine and nursing are often referred to as ‘caring’ professions, bullying harassment and ‘teaching by humiliation’ are a common experience in hospitals, particularly for students and interns.

The cast of four relate stories of personal experiences gathered from people working in the health profession.  Spoken simply into standing microphones on a circular setting, the stories present a disturbing picture of life amongst medical professionals.  The cast perform the stories very well, keeping it simple and tightly reined emotionally.

Movement to different microphones and around the stage kept the performance fresh visually but there was a light flicker throughout the performance that was distracting.  The sound design by Gail Priest underscored the dialogue but the use of a pulsating low bass sound at times was quite irritating.

Many of the stories presented were not a surprise but there were others that were very disturbing.  That people new to their chosen profession could be treated in such demeaning ways was especially upsetting.

Verbatim theatre isn’t an involving experience for this reviewer but the power of many of the stories presented here was quite compelling.

Len Power’s reviews are also broadcast on the Artsound FM 92.7 ‘In the Foyer’ program on Mondays and Wednesdays at 3.30pm.
Posted by Canberra Critics Circle at 9:35 AM