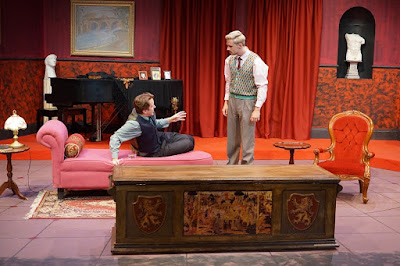 “ROPE” is usually remembered for the Alfred Hitchcock fllm of 1948 but the original 1929 stage play has, to my mind, rather more charm and terror.

Hitchock’s frequent film music collaborator Bernard Herrmann (he didn’t do “Rope”) gets a brief nod in Canberra Rep’s excellent production but otherwise this seems to be pretty much the play as it started out.

They then proceed to bundle the corpse into a large chest, and place it downstage where the audience cannot ignore it. It becomes the buffet table for the guests who arrive a little later.

The guests include moody WW1 veteran Rupert Cadell (Ryan Street),who carries wounds and is prone to limping restlessly around the room with the aid of a stick. There’s a lovely touch of a dark Richard Hannay about this performance. He knows what it is to kill, but in the ‘legitimised’ setting of a war.

Callum Wilson and Alex McPherson do well as Kenneth Raglan and Leila Arden, the worryingly vapid pair of guests who are courting in a flippantly fashionable way.

There’s dramatic irony in the other guests, the victim’s father Sir Johnstone Bentley and his sister Mrs Debenham. Anne Freestone’s terse Mrs Debenahm serves as a bit of comic relief. Saban Lloyd Berrell’s gentle and dignified Sir Johnstone hovers unknowingly over the chest containing the remains of his son to the point where the ironies become overwhelming.

And the meal on the chest is served in style by the urbane and unknowing servant Sabot (Ian Russell).

There’s no interval and the tension rises as Cadell comes closer to the truth. It's murder without motive. Well, there is a motive, something about being superior in a Nietzschean sort of way which appeals to Brandon. Carroll’s performance highlights Brandon’s moral blindness and arrogance.  Wiseman’s Granillo in a nicely judged descent into intoxication seems to be increasingly seeing the probable consequences for the murderers. in the end it is a duel between Brandon and Cadell, Granillo having retreated into a succession of bottles.

Fans of classic murder mysteries should not miss it.

Posted by Canberra Critics Circle at 1:03 AM