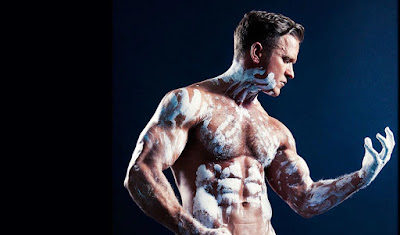 “It will shock and awe you” Brent Ray Fraser teases his audience. I’ve seen foot and mouth art created by artists with disabilities. But the mind boggles at the thought of penis art. Butt naked Brent Ray Fraser takes art to a new dimension. The unbelievable and exceedingly well hung tool of his art is splashed with paint and pokes and sweeps at the canvas to the accompaniment of the pounding rhythms of disco (Sonny and Cher’s The Beat Goes On) on the one hand and the playful aria, Make Way For The Servant from Rossini’s The Barber of Seville on the same hand  as he caresses his mighty organ with daubs of white or black paint. His naked body ripples and writhes as he applies his penis to the canvas.

His taut and terrific frame, sculpted by workouts that bulge his muscles, firm his six pack and tighten his butt is itself a sculpted work of sinewy art.  His flaccid penis brushes this way and that as an image slowly emerges from the strokes and dabs, and it becomes evident that Fraser is more than a well-buffed specimen of the naked male.

Landscape, depicting a scene of a forest near his Canadian home and a portrait of a sitter from the audience denote a talent that transcends the fearless nudity. What could easily become gratuitous exposure of an unusually well-endowed reproductive organ becomes cheekily confronting performance art. Eros does not descend upon the hallowed stage of the Spiegeltent. Those prone to penis envy may stare wide-eyed in amazed disbelief and those with a penchant for parts of the human form may feel some delight, but there is an overriding sense of self- mockery that evokes laughter rather than awe.

Like any gimmick, and however talented Fraser may be as a performance artist who dares to flaunt convention as well as his mighty appendage, The Naked Artist is a one-off curiosity. Fraser’s show is only forty five minutes long, but it is repetitive and although one does not know how the final work will be revealed. Fraser’s antics and audience participation seem extended to eke out the time. Either he needs to introduce different elements to build interest, suspense and surprise or he needs to get to the point more quickly. I hear that he performed a ten minute segment at Alan Cumming’s Club Cumming. That is long enough.

But then, this is a Cabaret Festival, and Fraser dares to go where no penis went before to the amusement of some members of the audience. Fraser’s full frontal frolic and cheeky smile invite an unsuspecting audience to revel in the sheer tongue in cheek abandonment of inhibition. But this is one time when his act was too long.

Time Out NYC is advertised as saying “You’ll certainly leave inspired and very stimulated” To do what? I left the Spiegeltent before the end of Fraser’s penile manipulation to catch the second half of Vince Jones’s Art of Protest, which I did leave inspired and stimulated. And there wasn’t a penis in sight!