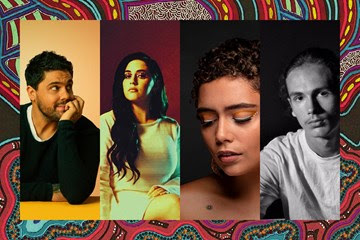 Marked with traditional white pigment and wearing a red loin cloth, Kaurna man Isaac Hannan welcomed the audience in the Spiegeltent to country and offered a moving rendition on the didgeridoo. There is a nobility to his presence and the playing that resonates through more than 40,000 years of First Nation existence on the land and with the land. It is a moving prelude to the Adelaide Cabaret Festivals salute to the indigenous culture of the past and the emerging talents of the present and the future. Hosted by comedian Steph Tisdell, this exciting  event, inspired by ABC Music’s Deadly Hearts Albums featured young and emerging indigenous artists and headliner, six time Aria Award winner, Dan Sultan.

In her introduction Tisdell promised a standard of performance that would show the deadly power of blackfellas and “blow your minds” It was no empty promise. Her observation that the talent that would appear could take their place on any stage – white fella or black fella or any fella – was right on the mark. Triple J Unearthed High Indigenous Initiative winner, seventeen year old Aohdan opened the show with a mix of original songs and covers by his inspirations Josh Black and Alexander Biggs and a song, Fortune Cookie that he stole from his Dad. Already releasing his singles and working on an album. Aohdan is a name to remember. His songs about his teenage life already show a musical maturity that had the audience breaking into instant applause after his Fleetwood Mac number at the close of his bracket.

Steph announced Kee’ahn’s song Better Things as the anthem of Covid, a song tht left Tisdell in tears.  With a voice that soars like an angel’s , Kee’ahn draws us into a world of sadness, of the death of her grandmother or the bust-up with a lover but offers a future of hope as she searches for a way to navigate her world.  Here is another name to remember. Kee’ahn sings from the soul with the spirit of a shining talent.

Only the impressive Tia Gostelow from Brisbane was able to get to the festival with her band, Jordan on guitar, Izzy on bass and Sebastian on drums. The Melbourne lockdown left bands stranded and solo artists were left to perform with only a guitar as accompaniment. After being blown through the roof by Tia’s enthusiast band members, I was thankful that I could enjoy the pure sound of the artists in the Spiegeltent. If the band had been on the Festival Theatre stage as initially advertised in the festival brochure, their sound would have been better balanced. I wondered too whether they had had time to do a sound check. It was not until Tia’s Get To It that the lads on the mixing desk actually got it and the gig settled into a  well mixed sound. Also a Triple J Indigenous Innovation Award winner, Tia sings the songs of her experience. She too is an emerging artist who is already making her mark and has a bright future ahead of her.

The three young artists are already well on the way to taking their place on the national stage. Their talent is prodigious. Their love of music and inspiration, but they are still on the cusp of progressing their art.  There is work to be done of giving the lyrics their rightful place and making sure that they are heard.  The music stiirs the heart, but it is the lyrics that arouse the mind. Aodhan, Kee’ahn and Tia are the exciting new generation of Australian musicians, song-writers and singers. Their heritage is indigenous but their talent is universal born of all artists and created for all people. They are the voices of reconciliation and the hope of generations to come.

The last hour of a four hour concert was handed over to the charismatic award winning Dan Sultan. Seated before the mike, and with a borrowed guitar and various borrowed equipment, because of Covid lockdown and hotspots,  Sultan  without his band, stranded in Melbourne “making sourdough.” Held the audience in the palm of his hand with his country and western songs of survival (Tarred and Feathered) and political cruelty (Boat) .  With his engaging chatter and anecdotes, his earnest and heart felt songs and his brilliant playing on a borrowed guitar; Sultan earned his title as headliner and the love of an audience who delighted in his gift to music.

All in all, Deadly Hearts Celebrating Australian Indigenous music was a slick production, smoothly hosted by Tisdell and demonstrating an array of talent that is performed by artists with an indigenous heritage but making music that is  uplifting and entertaining for all.