It is the music that drives Raphael Bonachela’s choreographic inspiration. It was during a conversation with composer Bryce Dessner following the Notre Dame Cathedral fire in 2019, while both were reflecting on the impermanence of human life, the planet and human relationships, that the inspiration for “Impermanence” began to emerge.

Originally a 40 minute work, the first iteration of “Impermanence’, responding to Dessner’s score composed specifically for the Australian String Quartet to play live on stage during the performance, was in rehearsal for its first performances on the stage of the Sydney Opera House. Three days before the opening, the Covid-19 pandemic lock-down caused the Opera House season to be cancelled.

As it happened, the lock-down also coincided with the 2019 bushfire crisis which overwhelmed Australia. Dessner himself was deeply affected by the images coming out of Australia of the bushfire devastation, so when approached by Bonachela for more music to extend the work into a full-evening presentation, he readily agreed, and it is this extended version that Canberra audiences were treated to during this season. 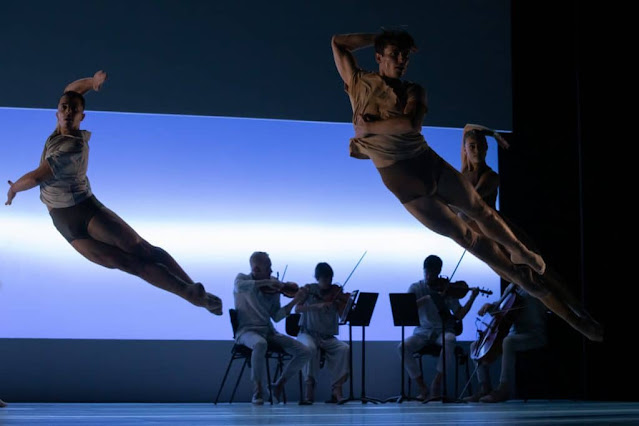 The curtain rises on a cross-lit stage, with the Australian String Quartet seated to one side at the back of the stage. While the ASQ plunge into Dessner’s highly emotional composition, the dancers, one-by one and costumed in revealing earth-coloured gym wear, enter along a corridor formed by the lighting. Each performs an athletic variation, before joining the other dancers restlessly moving across the stage.

Occasionally the ensemble pauses or drops into sections of complicated unison variations, their movements dictated by the urgency of Dessner’s score. For 65 minutes, non-stop, 16 super-fit dancers jump, twirl, twist, writhe and contort their bodies around the floor. As the work progresses the backdrop slowly ascends to reveal another brightly lit backdrop which throws the dancers into silhouette.

The dancers now form various groups and combinations, each working independently of the other, with arms and legs shooting out unexpectedly forming beautiful sculptural shapes and patterns. The result is both mesmerising and fascinating, but happening so quickly that it is hard to remember exactly what you saw, within seconds of seeing it. Impermanence?

Punctuating the predominately ensemble sections were a series of intricate, short muscular solos. Those by Chloe Leong and Dimitri Kleioris caught this reviewer’s eye. Other dancers also impressed but were not easy to recognise in the sometimes subdued lighting.

“Impermanence” ends surprisingly with an emotional solo performed by a male dancer to the song “Another World” composed by Anohni, the lyrics concluding with the words…

“I need another place. Will there be peace?

I need another world. This one’s nearly gone.”

A deeply felt response to a perplexing time “Impermanence” is a stunning addition to the long line of compelling dance works created by Raphael Bonachela for the Sydney Dance Company.