HELLO... IS THERE ANY BODY THERE? 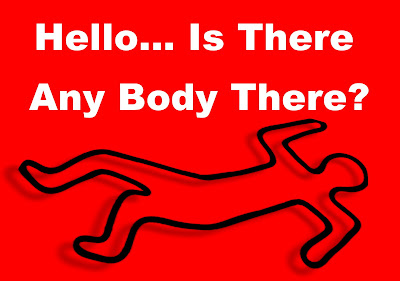 A farcical satire of murder mysteries and of theatre itself, “Hello… Is There Any Body There?” is a play full of groan-worthy weak jokes, very smelly red herrings and appallingly clichéd characters.

Ian Hornby was a British playwright who wrote over 50 plays in his lifetime.  He produced at least a couple of sequels to “Hello… Is There Any Body There?”

Set at remote Squire Grange in the English countryside, Lady Amelia searches for new ideas for her latest murder mystery novel.  There is a murder, of course, and everyone tries to work out who the murderer is before he or she strikes again.

It’s made very clear to the audience that we are watching a play as the plot unfolds.  Characters frequently address the audience directly, criticizing the genre as well as the play itself.  It adds an unexpected and refreshing dimension to the show.

Certain audience members are accused of being the murderer and there’s a hilariously awkward moment when the cast wonder if members of the audience might have been poisoned during the interval.  Luckily, it appears that we were just asleep, not dead.

Cheryl Browne gives Lady Amelia all the expected airs and graces and Kim Wilson is a nicely clichéd and boozy Sir Malcolm.

Jason Morton gives a fine silly ass characterization whose sole purpose to the plot seems to be to just hang around and Garry Robinson as the butler, Smalls, and Marian FitzGerald as the housemaid, Mabel, get some of the best laughs in the show.

Joan White as Miss Marbles and Salli Willings as a decorative WPC Nunnall and even Mary Domitrovic, the prompt, get their moments to shine later in the show.

Director, Jon Elphick, who also designed the substantial and attractive set, keeps the action flowing clearly.  There are some laboured parts of the script that could have benefited from a speedier pace at times.

Overall, this is a delightfully silly evening of jokes about murder mysteries and theatre generally.  I had a good time trying to second-guess the plot and getting it wrong.

This review was first published in the Canberra City News digital edition of the 29 May 2021.

Posted by Canberra Critics Circle at 8:55 AM